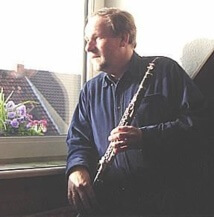 Wilfried Berk grew up in Rio de Janeiro/ Brazil, where he was born as a son of German immigrants. He studied at the National Academy of Music in Rio with Prof. Jayoleno dos Santos. After his graduation he became a member of the Orquestra Sinfônica Brasileira (OSB) and was a founding-member of the Quinteto Villa-Lobos in 1962. Events with the Quinteto in 1964: – Caravana da Cultura, touring Northeastern Brazil – and a tournée through South America in official mission of the Brazilian Ministry of Foreign Relations -concerts in Buenos Aires, Rosario, Santiago, Vina del Mar, Valparaiso, Asunciôn, Montevideo (May-June).

For over 30 years he has had a teaching position in Hanover/ Germany, this in addition to his activities as a clarinet soloist and chamber musician, as an arranger and editor of his own publications – records, the clarinet involving articles (example: The large presence of the Boehm clarinet at the CD market) and music scores: clarinetto arioso & clarinetto virtuoso/ editor Simrock/ Benjamin, Hamburg/ London. Some steps of his career: winner of the Youth -competition for soloists of the OSB – yearly, from 1960 to 1964: teaching assignment as a clarinet professor at the University of Salvador/ Bahia and principal clarinetist at the symphony orchestra there (from 1964 to 1967). Since May ’67 living in Germany alter a study (thanks to a scholarship from the German Academic Exchange Service) with Diploma in Berlin (Prof Heinrich Geuser): orchestra musician in Marl (Philharmonia Hungarica) and Stuttgart Philharmonie.

Many recordings and recitals in Europe and South-America (the main repertory for Duo) for radio with his wife – the pianist Elisabeth Berk-Seiz Together with German and Brazilian music colleagues he has established since 1991 the groups Escola de Choro, Duo Carioca and Canto do Rio to the spreading of choro-music, which is very important to him, due to his roots. He toured with them in Germany, Brazil Portugal, Spain, Switzerland, and the U.K. (London and surroundings).
Discography: