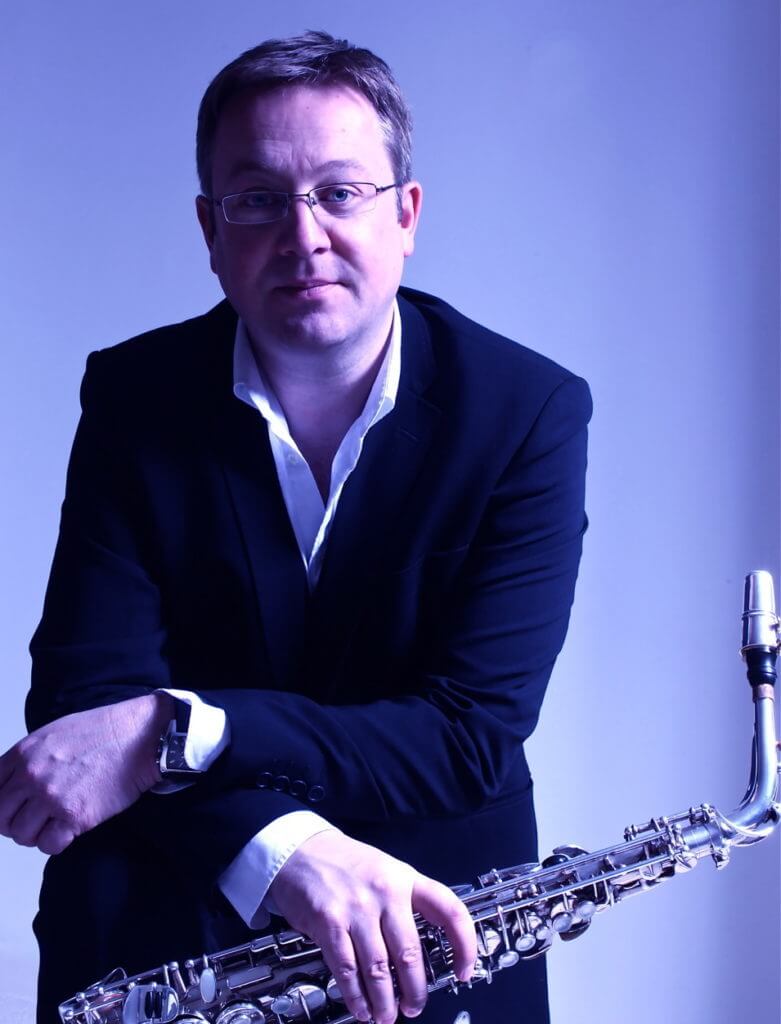 AND M/O LIGATURE FOR CLASSICAL

ROB BUCKLAND is internationally acclaimed as one of the most distinctive, versatile and influential Saxophonists of his generation, performing and recording as concerto soloist, recital soloist, with his Equivox Trio and with the Apollo Saxophone Quartet. He regularly performs and records with a diverse range of ensembles, both classical and jazz, ranging from the Michael Nyman Band and Michael Buble’s UK Big Band to work with orchestras such as the Halle, BBC Philharmonic, RLPO, CBSO, LSO, BBCSSO, RSNO, Opera North, Manchester Camerata and Northern Sinfonia. He has performed as concerto soloist with the RLPO, CBSO, Orchestra of Opera North, Chinese National Symphony, Strasbourg Philharmonic, Banda Sinfonica Porto, the Bands of the RAF and Royal Marines, and the RNCM Wind Orchestra, NYWO, NYWE and NYWOW. He was also recently featured as soloist on Elvis Costello’s orchestral concert tour. He has commissioned and recorded music from many of today’s leading composers, featuring on his own solo CDs, a CD with his Equivox Trio, eight CDs with the Apollo Saxophone Quartet, (of which he is a founder member, performing, recording and commissioning over 100 new works for the medium since the group inception in 1985) and a disc with the Apollo Saxophone Orchestra featuring the music of Barbara Thompson (2012). His recently released CD of Saxophone Concertos ‘Gameshow’is receiving critical acclaim, and his latest duo CD “Duality”features world premiere compositions from composers such as Tim Garland, Jason Rebello, Barbara Thompson, Graham Fitkin, Andy Scott and Rob himself: music that blurs the lines between written and improvised performance. Future projects include a new recording and performance collaboration with pianist Gwylim Simcock and strings and a new project with the Apollo Quartet joining forces with the innovative Artvark Quartet, from Holland. A concerto commission from Tim Garland, and plans for 2 new CDs 2019 & 2020 are underway, one focussing on contemporary saxophone repertoire, and the other featuring Rob as composer/performer.

As a composer, Rob’s works appear on the concert stage and on many examination syllabuses. He is currently completing a much anticipated series of works for solo saxophone and backing track (Sopranicity, AltoGenesis & Tenacity, for soprano, Alto and Tenor saxes respectively, with a Baritone work to complete the set by the end of 2018), and has written works for Solo Saxophone, Saxophone & Piano, Saxophone Quartet, Saxophone Ensemble, Saxophone & Harp, Saxophone Duets, Saxophone, Piano and Strings, Massed Saxophone and Percussion Ensemble, Saxophone & Horn Quartet, the Tenor Saxophone Collection and concert works written and recorded for Group S, and on his own Equivox Trio and Duo CDs. In recent years, Rob has expanded his work as creative record producer, recording and producing commercial CDs for groups as varied as Big Band, Saxophone Quartet, String Ensemble, Harp Duo, Saxophone Orchestra, Brass Dectet, Percussion Ensemble, and multimedia projects alongside his own solo recordings. He has written a Saxophone Method book ‘Playing The Saxophone’detailing advanced technique and practice methods based on 20 years of teaching at the RNCM. He was the only UK saxophone soloist to perform in the opening concerto concert at the 2017 World Saxophone Congress in Strasbourg, and the EurSax’17 Congress in Porto, where he also performed with the Apollo Quartet and Group S and conducted the RNCM Saxophone Orchestra. He was also a member of the international jury for the WSC Saxophone Quartet competition, with saxophone colleagues Tim McAllister, Arno Bornkamp and Vincent David. He is in demand around the world as a visionary teacher of the saxophone, recently giving masterclasses in Australia, Holland, South Africa and Portugal, and runs his own summer-schools for young saxophonists in Manchester and Harrogate each year. He is also co-artistic director of the RNCM Saxophone Day, the largest annual gathering of saxophonists in the UK, now in it’s 18th year, inviting the world’s leading jazz and classical players to the UK to perform and inspire over 250 saxophonists at each event.

Rob is Professor of Saxophone and Deputy Head of Chamber Music at the Royal Northern College of Music, Manchester, co-Artistic Director of the annual RNCM Saxophone Day, is a solo artist and endorsee for Henri Selmer Paris saxophones and Vandoren Reeds, and is published by Astute-Music.