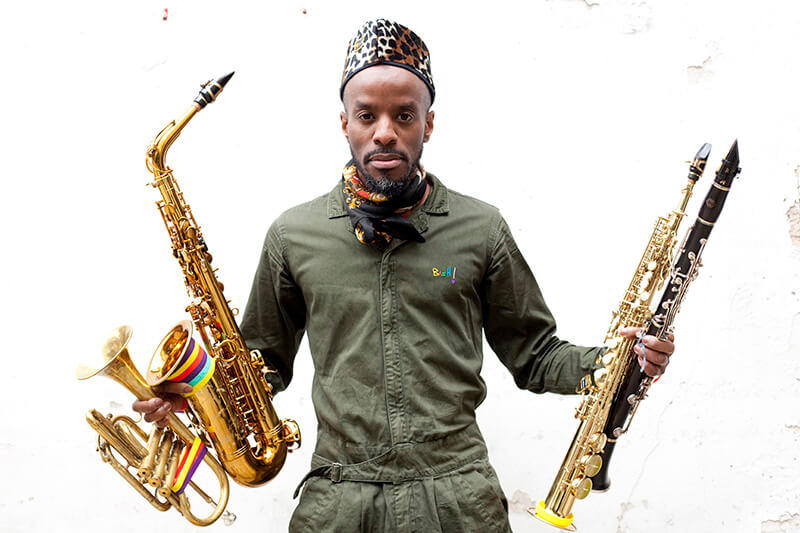 Album « Love Matters ! » (Jazz Village / [PIAS])
On Love Matters!, Jowee Omicil’s new album, there are African rhythms, melodies by Bach and Mozart, tinges of Thelonious Monk, a Venezuelan lullaby, Martiniquais songs, hints of the Orient and even Asia, the memory of an Englishman in New York, of Haitian Rara, Jamaican beats, flashes of funk И la Miles Davis, the rapture of gospel and of course, exclamations in Omicilian ‘BasH!’ style, as well as a rapper’s verve. All cleverly mixed together. You might think that this brand of music has no identity since it encompasses so many different things. But in fact, it simply mirrors who Jowee Omicil is, like a self-portrait in motion. And how could it be anything
else, coming from a man with such an appetite for life and fresh discoveries?
Jowee Omicil speaks many languages and plays just as many instruments – but prefers the saxophone. A son of Haitian emigrants, he grew up in Montreal. He started playing the sax in the church where his father was a minister, before studying at the Berklee College of Music in Boston, then moving to New York to launch his musical career – and, at times, confer with Ornette Coleman or accompany Roy Hargrove as part of the band RH Factor. He then lived in Haiti and Panama and settled in Paris a couple of years ago after signing with the Jazz Village label. Although ‘settled’ is perhaps not the best term to describe him. Retracing Jowee Omicil’s steps precisely would have
required a satnav. In any case, all of this – thirty years, ten years, a month or two hours ago – is ancient history. What counts is that Love Matters! The here and now, the epiphany, the magic of a moment shared, the sweat and bliss of work well done. The fifteen tracks on Love Matters! came out of the same recording sessions as Let’s BasH!, the album which brought Jowee Omicil to public notice in France
last year. It was cut during the last week of October, 2015, at La Buissonne studio near Avignon, often as the full moon was rising and other people were going to bed. The musicians were all in the same room, in a circle. Some were from the Caribbean, others from Europe (Serbia), others from Africa or Canada. Each one brought something to the music, which ended up surpassing them all.
Jowee Omicil flitted between instruments (saxophones, clarinet, cornet, flute, Rhodes piano) and offered up compositions on which the musicians then improvised. This is the essence of jazz, modern jazz: a joyful, generous form of music whose long history never hinders its progress or development. That’s how Jowee Omicil sees things, and how he plays them too. It’s also how the audiences who have seen him on stage in 2017 experienced things – whether in France, Africa, Canada or the Caribbean, at small venues or large festivals. In 2017, Jowee played with Tony Allen and BCUC and he’ll never forget it. He played in private at the small New York apartment of his
Cuban friend and drummer Francisco Mela, and still hasn’t got over it. He brought the public surprises, coolness and wholeness. A ‘refill’ of positive energy, a little like at church, where everything started for him, and where Love Matters! draws to an end. On this record, as on the stage, the effusive Jowee is an ‘entertainer’ crazy about melodies, groove and pop music, and no label applied to define him will ever stick. To choose the tracks on Love Matters!, he drifted back to Haiti, its language, its carnival rhythms and its roots before enlarging the circle to encompass the Caribbean and its African legacy. Then jazz, pop and classical composers brought him full circle. I’m not complicated, I’m just trying to write my own definition for music, my music is not easy to play, but easy to listen to.