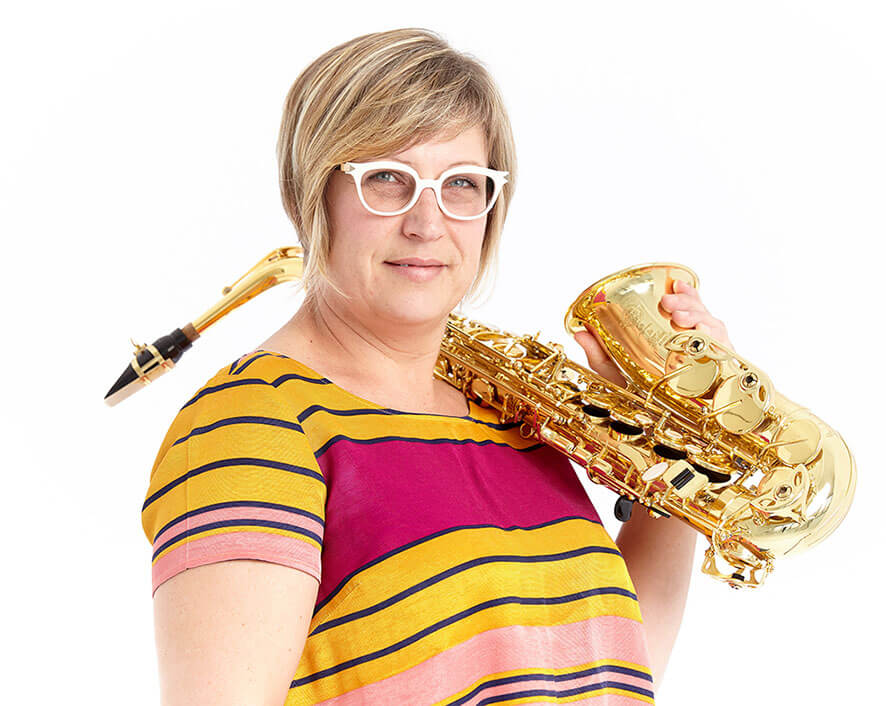 Canadian American saxophonist Jan Berry Baker has performed as a soloist, chamber and orchestral musician on many of the world’s great stages.  Recent engagements include performances across the United States, Canada, Japan, Mexico, France, Germany, Scotland, England, Ukraine, Switzerland, Austria and the Czech Republic. She has been featured as a concerto soloist with orchestras in Canada, Ukraine, USA, and most recently with the Sinfonica de Oaxaca in Mexico.

An advocate of contemporary music, Baker is Co-Artistic Director and saxophonist with Atlanta-based new music ensemble Bent Frequency. Founded in 2003, Bent Frequency brings the avant-garde to life through adventurous and socially conscious programming, cross-disciplinary collaborations and community engagement. Committed to exploding marginalized programming in classical music, one of BF’s primary goals is championing the work of historically underrepresented composers—music by women, composers of color and LGBTQIA+. In the last few years, she and Co-Artistic Director and percussionist Stuart Gerber have formed the Bent Frequency Duo Project. Together, they have commissioned over 30 new works for saxophone and percussion and have given countless performances of these works across the USA, Mexico, and Europe including their Carnegie Hall debut in 2016. Their work to fund the creation, performance and recording of new music has been supported by numerous national and international grants such as the Copland Foundation, French American Cultural Exchange (FACE), Barlow Foundation, Amphion Foundation, Ditson Foundation, Mid Atlantic Arts Foundation (National Endowment for the Arts/Andrew Mellon Foundation), and Culture Ireland to name a few.

As an artist and educator, Baker has held residencies at Nürnberg Tage Aktueller Musik, Sam Houston State New Music Festival, Charlotte New Music Festival, University of Georgia, New Music on the Point (Vermont) and Dakota Chamber Music Festival. She is highly sought after as a masterclass teacher and speaker, and has given presentations on contemporary music, entrepreneurship, nonprofits and grant writing, women in music, community engagement, socially conscious programming, career development and mentoring at major schools of music across the country.

Dr. Baker is currently Associate Professor of Saxophone and Woodwind Area Head at the Herb Alpert School of Music at UCLA.  Prior academic appointments include Georgia State University, Chicago College of Performing Arts at Roosevelt University, Northwestern University and University of Alberta.  She studied with Frederick L. Hemke, William H. Street and Barbara Lorenz and earned a Doctor of Music degree in saxophone performance from Northwestern University. She is a founding member of the Committee on the Status of Women in the North American Saxophone Alliance and is the leader of the CSW Women+’s Mentoring Program.  Jan Berry Baker is a Selmer Paris and Vandoren performing artist.