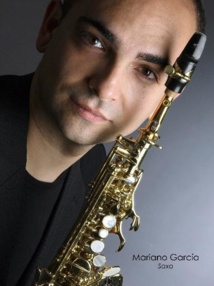 After beginning his self-taught studies in saxophone, Mariano García graduated with the highest honours at the Royal Conservatory of Music of Madrid.

Student of the most important international teachers such as Claude Delangle, Vincent David and Philippe Bracquart, he, in turn, nowadays gives numerous advanced courses in Spain and abroad, and also master-classes in the Music Conservatories of Barcelona, Salamanca and Saragossa.

During his long professional career, he has participated in several competitions, of which we can highlight his first prize at the International Saxophone Competition of Benidorm (2003).

Perfectly combining his pedagogical and soloist career, he tours in China (as for example in the International Music Festival of Yantai), in the USA and in the whole Spanish territory, offering an eclectic repertoire adapted to the different situations, making a special emphasis on contemporary pieces and all-time great classic transcriptions.

Passionate for the study of his instrument and for contemporary music, Mariano García goes beyond the work of the soloist and teacher, giving lectures in Conservatories, and also participating with Philippe Bracquart and Federico Coca in the lecture-concerts held for the postgraduate course 2008-2009 in the Conservatoire of Saragossa, where he currently teaches.

Among his latest activities, it is worth highlighting the concert tour and master-classes given around different American Universities in 2009 (North Carolina, South Carolina and Furman) or his designation as “Vandoren Artist”.

During this season 2009-2010, he is planning to offer several concerts in the north of

Spain with the Orchestra of the Pyrenees. He will also continue performing with the Saxophone Quartet “Gaudi”, along with Federico Coca, Miguel Ángel Lorente and Juan Antonio Aldehuela, all of them prestigious saxophonists.

Nowadays he is performing recitals with duo Ánima.