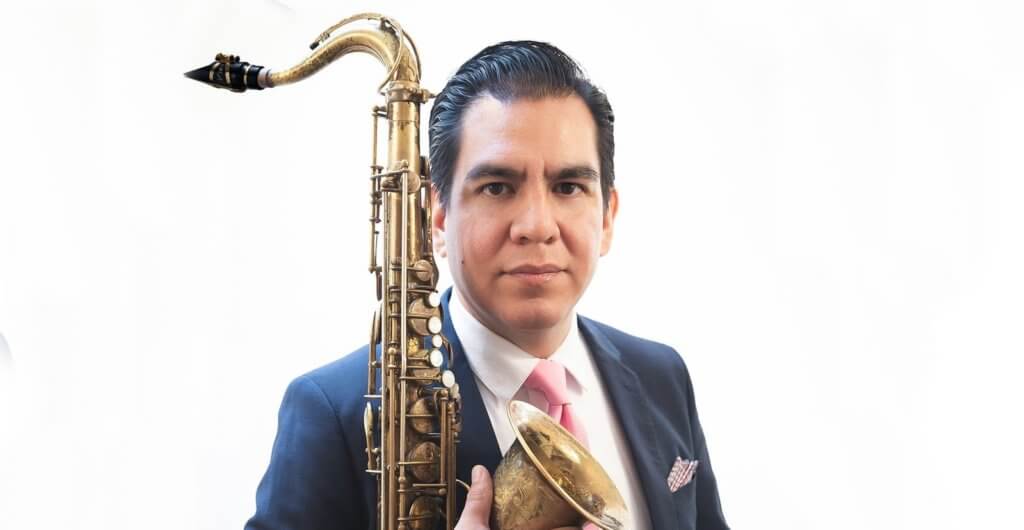 A world-class musician, composer, arranger and educator, Diego Rivera has entertained audiences for over 20 years. Rivera is known for his muscular tone and unique blend of straight-ahead mainstream jazz fused with music inspired by his Latino background and heritage. He is a tenured Associate Professor of Jazz Saxophone at Michigan State University where he also serves as Associate Director of Jazz Studies.

Rivera was born in Ann Arbor, MI and raised ‘just up the road’ in East Lansing, MI. Born into a Mexican-American family, his Chicano heritage has always been important to him and shaped his creative endeavors. His parents named him after the famed muralist, Diego Rivera. A trip to the Detroit Institute of Arts at a young age inspired him to make his own mark with the Saxophone rather than the brush. He attended Michigan State University where he studied with Andrew Speight, Branford Marsalis, Ron Blake and Rodney Whitaker.

In 1999, he began his professional and touring career with the Jimmy Dorsey Orchestra on their Big Band ‘99 tour. Since that maiden voyage, he has performed concerts at the most prestigious venues and festivals across the United States, Canada, Europe and Asia. He currently leads his own group, The Diego Rivera Quartet. Rivera has also toured extensively with JUNO-Award winning Canadian Jazz Vocalist, Sophie Milman and The Rodney Whitaker Quintet. He is a member of the The Ulysses Owens New Century Big Band (New York, NY), the Jazz @ Dr. Phillips Center Orchestra (Orlando, FL) and the Gathering Orchestra (Detroit, MI). He has also performed with artists: Ellis Marsalis, Kurt Elling, Christian McBride, Wycliffe Gordon, PRISM Saxophone Quartet, the Gerald Wilson Big Band and the Lincoln Center Afro-Latin Jazz Orchestra.

Rivera has several credits to his name as a recording artist, composer and arranger. His latest project Connections was released on Posi-Tone Records and was the “Highest Debut” on the Jazz Radio Charts. Rivera’s first recording, Hercules was released in 2006 on his record label, Rivera Records. His sophomore release, The Contender (D- Clef Records 2013) received national critical acclaim reaching the Top 10 on the JazzWeek Radio Charts. He has also appeared on several recordings as a sideman on the Posi-Tone, Mack Avenue and Detroit Music Factory Record Labels.

An avid composer and arranger, Rivera has written arrangements for various recordings, projects and artists most notably for Jazz at Lincoln Center’s “Motor City Jazz” concert. A tribute to the music and musicians of Detroit. His arranging work can be heard on recordings by: Carl Allen-Rodney Whitaker, Get Ready (2007) and Work To Do (2008); Ulysses Owens Jr., Onward & Upward (2014); The New Century Quintet, The Time Is Now (2014); Michael Dease, Decisions (2015) and Bonafied (2018).

Rivera is a passionate educator and has presented masterclasses at schools and universities both in the United States and abroad. He is Associate Professor of Jazz Saxophone and Associate Director of Jazz Studies at Michigan State University’s College of Music. In 2019 he was awarded the Dortha J. and John D. Withrow Teaching Award, the College of Music’s highest honor for excellence in teaching and scholarly achievement. He is musical director of the award-winning ensemble, MSU Jazz Octet I, the College of Music’s premiere Jazz Combo made up of the Jazz Studies Program’s most talented student-musicians. Several of Professor Rivera’s former students enjoy careers as professional musicians performing with artists such as: Wynton Marsalis and the Jazz at Lincoln Center, The Birdland Big Band, The Count Basie Orchestra, The DIVA Jazz Orchestra and the multi-GRAMMY Award winning group, Snarky Puppy.