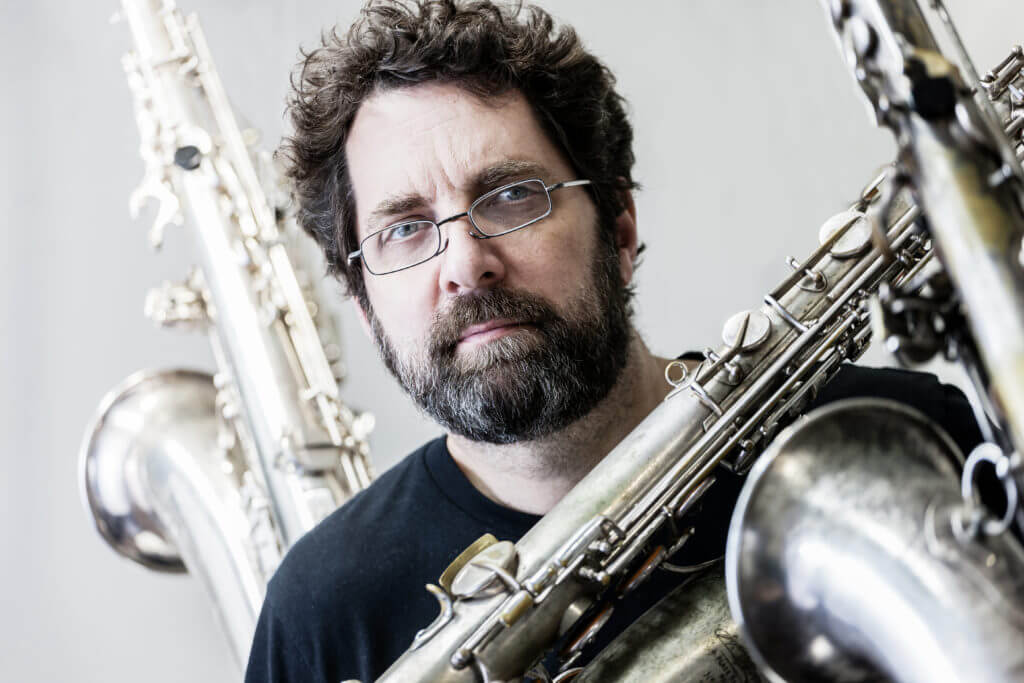 Andy Scott continues to create his own musical path. Drawing upon 30+ years of experience Andy has created a body of work that embraces performance and composition, notated music and improvisation, with a natural appreciation and feel that has developed from a musically open-minded approach from an early age, absorbing and having a passion for and of many styles of music.

A founder member of the acclaimed Apollo Saxophone Quartet (est.1985), Andy has toured and recorded worldwide, with the ASQ commissioning and premiering 100+ works. From collaborations with poet Lemn Sissay, the Shobana Jeyasingh Dance Company & a project where the quartet composed music to accompany a selection of George Melies films, the ASQ has most recently recorded a CD with the Artvark Saxophone Quartet from Holland. With a stunning mix of classical and jazz influences, the octet continues to evolve from an initial tour of South Africa in 2014.

With Duo partner Dave Hassell, Andy & Dave explore improvised soundworlds from percussion and saxophone, recording with Black Box, and performing from the UK and Paris, to the deep jungle of Mexico (in collaboration with Evaristo Aguilar).

An occasional soloist, Andy was honoured to have been invited to perform as tenor sax soloist in Sir Richard Rodney Bennett’s 70thBirthday Concert at the Queen Elizabeth Hall, Southbank Centre, London with the BBC Concert Orchestra conducted by John Wilson, performing Concerto for Stan Getz. At the request of Richard, Andy collaborated with the composer both editing the Concerto and Ballad in Memory of Shirley Horn.

After previously studying at the Royal Northern College of Music, Manchester (UK), Andy was appointed Tutor of Saxophone in 2000. With Rob Buckland they created the annual RNCM Saxophone Day, now in its nineteenth year.

The three worlds of performance, composition and education often overlap for Andy, with invitations from around the world to work with musicians of all ages and experience levels, professional ensembles and University/Music College students. From week long residencies to tailor-made Saxophone Days, Andy simply enjoys sharing ideas and making music with anyone that feels the same passion towards music-making.

For many years an endorsee of Vandoren Products and Selmer Saxophones, Andy is published by Astute Music.

“I have played Vandoren Traditional reeds for forty years on my classical set ups, and Java reeds on my jazz set ups. I love the Vandoren straps, reed resurfacer, reed cases and use the Optimum and MO ligatures. It’s always a pleasure working with Vandoren (Kerry Long in the UK) as every product is so thoughtfully and precisely developed, with a quality finish that is very durable. It’s that quality and consistency that has developed a sense of trust in me towards Vandoren products over a number of years!”