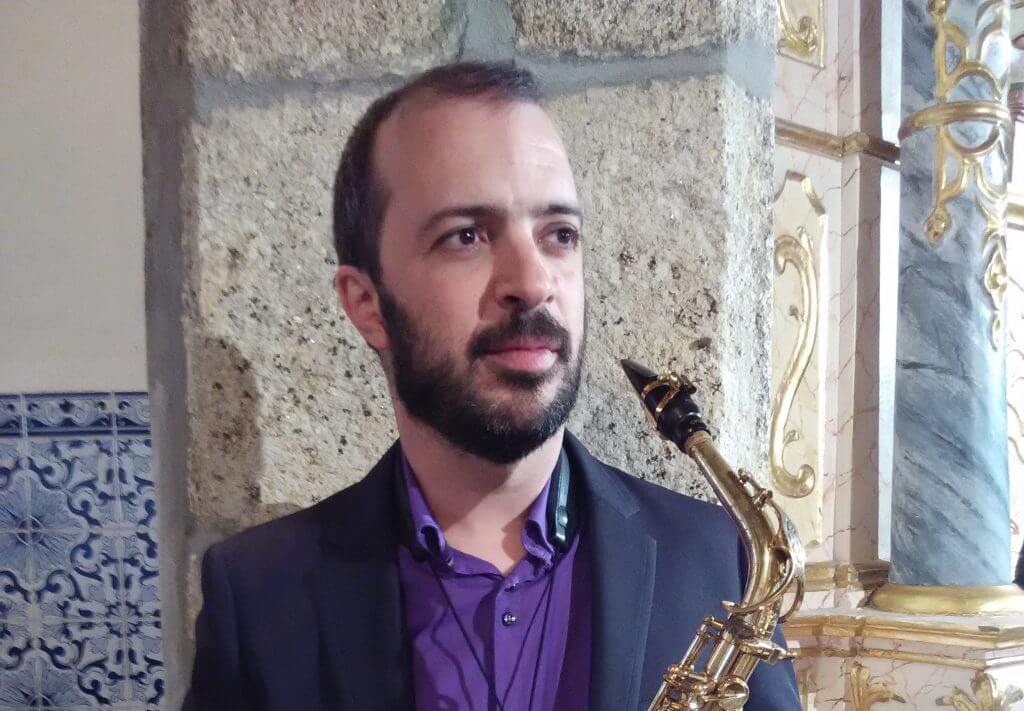 He graduated in Saxophone and Chamber Music at Cergy-Pontoise Conservatory, France, where he obtained a Médaille d’ Or with professor Jean-Yves Fourmeau. He also graduated in Musicology at Universidade Nova in Lisbon.
He took classes with Vincent David and master-classes with Daniel Deffayet, Claude Delangle, René Découais and the Rascher Saxophone Quartet.

He won several prizes: the 1st prize at unanimity and with congratulations from the jury at the U.F.A.M. Contest in Paris, in 1995, in the category “Supérieur”, and the 1st Prize at the Ile-de-France contest in Chamber Music, in 1998. He also won a 2nd prize (category Excellence) at the Léopold Bellan contest, in 1995.

While in Paris he was a member of Silken Sax e Yann Lemarié saxophone quartets. He played has a soloist in Portugal, France, Germany, Belgium and Slovenia (World Saxophone Congress).
He has been very active in the promotion of new contemporary music and has been working closely with composers like Christopher Bochmann, Pedro Amaral, Antonin Servière,  Amílcar Vasques Dias, António Chagas Rosa, José Carlos Sousa, Helder Gonçalves, Eduardo Patriarca, Sérgio Azevedo, Anne Victorino d’Almeida, Fernando C. Lapa, Francisco Monteiro and João Pedro Delgado, whose music he has premiered.
He has thus contributed to a growth in contemporary repertoire for saxophone, specially from portuguese composers and with an emphasis in chamber music.
He also contributed to introduce, in Portugal, important pieces of the repertoire that hadn’t been played there before, like Anton Webern’s Quartett op. 22.
He’s a founder and a distinguished member of Síntese – Contemporary Music Group, which has become one of the leading contemporary music ensembles in Portugal.
He’s also a regular member of other chamber music groups, like the Trivium Trio which features saxophone, piano and soprano voice.

Carlos Canhoto is currently Professor at Castelo Branco’s Higher Education School of Arts (ESART) and has been teaching at Guarda, Covilhã and Castelo Branco’s conservatories. He’s also a researcher at INET/MD music research institute in Lisbon.