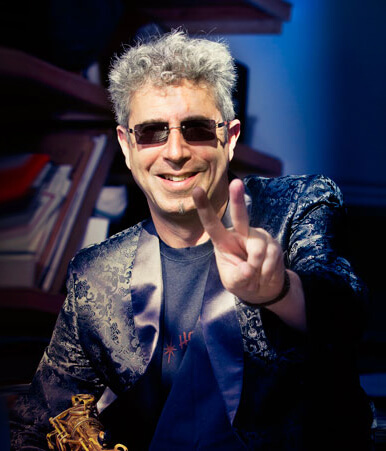 Ken Field is a saxophonist, flautist, percussionist, and composer. Since 1988 he has been a member of the internationally acclaimed electrified modern music ensemble Birdsongs of the Mesozoic, with whom he has recorded eight CDs.

Field leads the Revolutionary Snake Ensemble, a experimental and improvisational brass band. Year of the Snake, the group’s 2003 debut, was included on best-of-year lists from WNYC Radio (New York), the Gambit Weekly (New Orleans), and Radio Popolare (Milan, Italy). 2008’s Forked Tongue spent 2 months on the CMJ North American jazz top 20 chart. The New Yorker selected the Forked Tongue NYC CD release performance as its nightlife pick of the week. The group has performed at the Kennedy Center for the Performing Arts, the Brooklyn Academy of Music, the Museum of Fine Arts (Boston), the Puffin Cultural Forum, Berklee Performance Center, and numerous other venues, and has been nominated for two Boston Music Awards and several Boston Phoenix/WFNX Best Music Poll awards.

Field has performed in the US, Canada, Mexico, France, Germany, Spain, Portugal, Hungary, Ireland, and Japan, and has been awarded residency fellowship grants at the MacDowell Colony (New Hampshire),the Ucross Foundation (Wyoming), the Fundacion Valparaiso (Spain), the MacNamara Foundation (Maine), and the Atlantic Center for the Arts (Florida). His musical projects have been featured in The New York Times, Saxophone Journal, The Boston Globe, The Los Angeles Times, The Washington Post, Tower Pulse, Billboard, Cadence, The Wire, The Orlando Sentinel, The New Yorker, and many other publications. Field has performed for President Bill Clinton, with Trombone Shorty, Charles Neville, Grammy-winning percussionist Glen Velez, former J. Geils frontman Peter Wolf, the Jazz Composers Alliance Orchestra, and the Georgia Symphony Orchestra.

In 2004 he was commissioned by Bridgman/Packer Dance to compose music for Under the Skin, which has been performed in NYC, Washington (DC), Cincinnati, Dublin, Birmingham, and Boston. A CD of this music was released in 2006 on Innova Recordings.

In 2000 Field released Tokyo in F, the live recording of an improvised concert he gave in Tokyo with three prominent Japanese musicians he met only just before the performance.

Field is also an award-winning composer of music for animation, film, and dance. His music is heard regularly on the popular internationally-broadcast children’s television program Sesame Street, in collaboration with his wife, animator Karen Aqua. His soundtrack work has been broadcast on HBO, the Movie Channel, the Sundance Channel, and PBS.