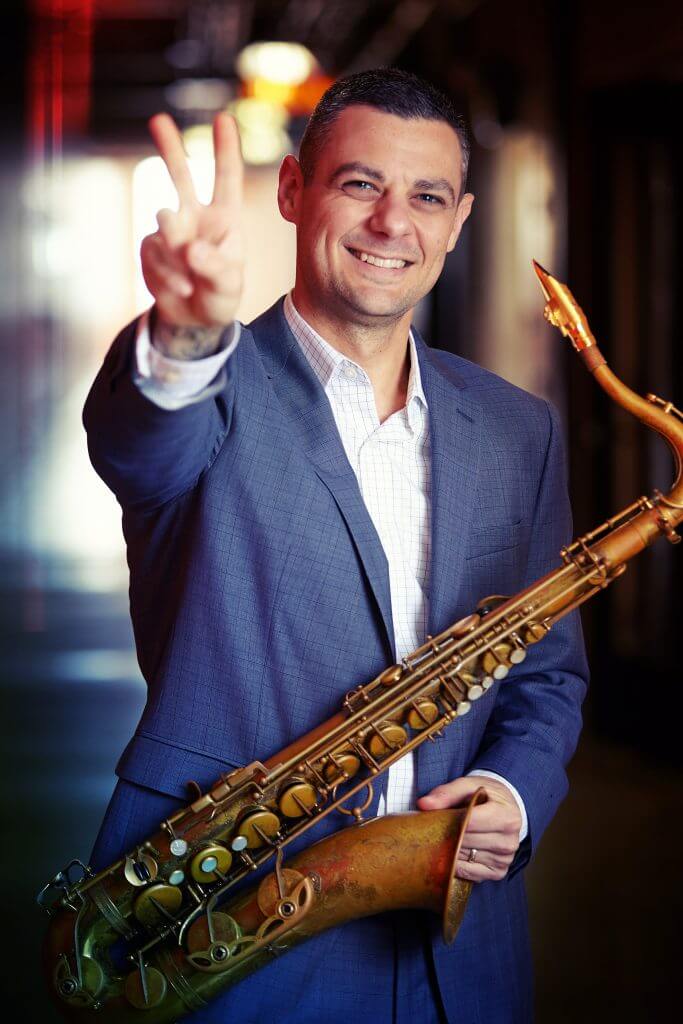 Jazz saxophonist Christopher Madsen is one of the most in-demand figures in the Chicago jazz world as a performer, composer, and pedagogue.  He serves as full-time jazz faculty at the University of Illinois at Chicago, jazz faculty at Midwest Young Artists in Highwood, IL, and was Coordinator of Jazz Studies at Northwestern University (Evanston, IL) from 2008-2014. He is a sought-after jazz clinician, adjudicating at jazz festivals and offering workshops to ensembles of all ages and levels from across the globe. He is a Vandoren Performing Artist, member of the Fulbright Specialist Program roster, Jazz Education Network, the National Educator’s Association, and the National Association for Music Education. Madsen serves on the Education Committee for the Jazz Education Network and has been featured in Jazziz Magazine (2005) and the Jazz Spotlight for artsamerica.org (2012). Madsen has also contributed jazz articles to The Instrumentalist magazine and been interviewed on several radio broadcasts about jazz history and his performing career.

After graduating from DePaul University in Chicago with a B.M. in Jazz Studies and studying with the likes of Mark Colby, Bobby Broom, and Dr. Bob Lark, Madsen was accepted into the jazz program at the Juilliard School in 2003. He spent three years in New York City, performing with and writing for such jazz masters as Wynton Marsalis, Victor Goines, Loren Schoenberg, Wycliffe Gordon, Kenny Washington, Bobby Short, Michael Dease, Jon Irabagon, Lage Lund, Ulysses Owens Jr., Aaron Diehl, and many others. After graduating from Juilliard, Madsen relocated to Chicago in 2006 and has since been a fixture on the local scene, performing regularly at major venues such as the Jazz Showcase, the Green Mill, and Andy’s Jazz Club.

As a leader and sideman, Madsen’s discography is extensive. He has released five albums as a leader since 2004 and can be heard as a player and composer on countless additional releases with artists such as Michael Dease, Marquis Hill, and Jeff Hamilton. His saxophone playing and arrangements can be found on the Loren Schoenberg Big Band’s 2006 release “Black Butterfly” featuring the vocal stylings of jazz legend Barbara Lea.

Madsen is a published composer with Kendor Music, Inc., Walrus Music, and the UNC Jazz Press. He was commissioned by the Illinois Music Education Association to write the 2012 All-State Jazz piece entitled “With Gratitude” and dedicated to his high school band director Don Shupe. He was honored to have his arrangement of the standard “Never Let Me Go” recorded by Phil Woods and the DePaul Jazz Ensemble released in 2007 to rave reviews. He maintains a consistent compositional schedule writing for Chicago- and New York-based ensembles such as the New Standard Jazz Orchestra, the Smithsonian Jazz Masterworks Orchestra, and the Jazz Museum in Harlem All-Stars. Madsen’s compositions and arrangements are performed regularly by ensembles of all ages—from middle school to the professional jazz world.
Madsen is an integral part of the Jazz Studies Program at the University of Illinois at Chicago and is responsible for teaching Jazz Improvisation, Jazz Composition, Jazz History, Applied Jazz Saxophone, and ensemble direction. He serves as jazz faculty at Midwest Young Artists in Highwood, IL, directing ensembles and teaching classes in music theory, history, composition, and appreciation. He has performed and/or presented at the 2011, 2012, 2013, and 2016 Jazz Education Network conferences, and led groups which have performed at the Illinois Music Education Association All-State conference and the Midwest Band and Orchestra clinic. Madsen currently resides in the Chicago area with his wife and son.