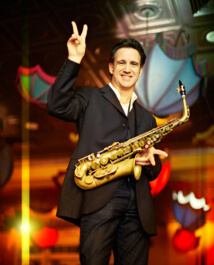 When Eric was just 10 years old he used to dream of becoming a professional musician, to make his own records and tour around the world. When he first started playing his saxophone in 5th grade he really had no idea what all that even meant. Well, after having performed in over 60 different countries, recording 10 solo CD’s and playing on hundreds of other records, films, television shows and commercial jingles, Eric has definitely exceeded those musical goals he set for himself way back then.

After graduating high school in 1976, Eric went on to study at the Berklee College of Music in Boston, MA. There he studied with the legendary saxophone teacher, Joe Viola. It was Joe that taught Eric how to really practice. Joe introduced Eric to the books of Marcel Mule, Pierre Londeaux, Sigmund Rasher and many others. Under Joe’s wing, Eric practiced at least 4 hours every night. There were also jam sessions going on all the time where the students could get together and play for hours. Eric ended up returning to Orange County, CA after being at Berklee for 2 years to try and pursue his career. When he left Berklee, he had achieved the highest proficiency rating given by the school. In 1995, Eric was awarded the Berklee Distinguished Alumnus Award for outstanding achievements in contemporary music.

After moving to Los Angeles in 1980, Eric auditioned for famed New Orleans trumpeter Al Hurt. He got the gig, moved to New Orleans and played with Al and his band for about a year. “We would play at Al’s club in the French Quarter during the week and almost every weekend we’d travel to a different city to play. It was my first time seeing most of the country.” When the band ended Eric returned to L.A. and began the slow climb into the world of professional music. He played in every situation he could. A spot opened up in the Disneyland Band and it was there that Eric met many of the studio musicians that he still works with today.

While the Disney Band was a full time job, Eric would still play jobs at night in a lot of the clubs around town. It was during one of these club gigs with bandleader John Novello that Eric was about to get his first big break. While playing at a club in North Hollywood, Eric looked up from the stage to see jazz legend Chick Corea walk through the door. Chick had been one of Eric’s very favorite all-time musicians. “When I looked up and saw Chick walk in I thought I must be hallucinating!” Chick was a friend of John’s so Eric figured he was there to see John’s band. But unbeknownst to Eric, Chick was looking to add a sax player to his famed Elektric Band with bassist, John Patitucci, drummer Dave Weckl, and guitarist Frank Gambale. Not only did Chick stay for the whole night but he sat in during the 2nd set. “We played one of Chick’s standards, “500 Miles High”. Thank God I knew that tune!” Eric said that his wife Lee Ann happened to be there that night and could see the excitement in his eyes. “It was an incredible thrill to be on stage playing with one of my all time musical heroes.” Afterwards they talked and Chick told Eric how much he liked his playing.

The real bombshell, however, didn’t hit until the next day. While Eric was sitting in the Disneyland Band break room the phone rang. “The bass player answered it and said it was for me. He had an odd look on his face and when I asked who it was he said it was Chick Corea’s manager. I totally froze!” Eric finally made it to the phone and the manager told him that Chick wanted him to join the Elektric Band.

Needless to say, Eric didn’t stay in the Disney Band long after that. The Elektric band went on to record 6 albums, won 2 Grammys and traveled to every corner of the globe. After the Elektric Band’s “Light Years” CD was released, Eric was offered his first solo record contract with GRP records. “It was a dream come true for me. Playing with Chick and getting signed to my own deal, what more could I ask for.” Chick produced Eric’s first record, “Voices of The Heart” and it was recorded live at Mad Hatter Studios in L.A. His next 2 CD’s, “Round Trip” and “Crossroads” were produced by Eric and his long time friend and bass playing giant, John Patitucci. Of the two, Crossroads was a recording that reflected where Eric’s musical head was at. “John and I wanted to make a record that people would talk about years later. We didn’t think about anything except the music. I still have people come up and tell me that Crossroads is their favorite record of mine… mostly musicians!” It was during that time that Eric became one of the most recorded sax players in contemporary jazz. He played on over 50 GRP records alone including records by Lee Ritenour, Dave Grusin, David Benoit, Don Grusin, Dave Weckl, John Patitucci, GRP All-Star Big Band and The Rippingtons. Eric juggled being a member of Lee Ritenour’s band, David Benoit’s band, Chick’s Elektric band and his own band.

In 1991, Eric decided to call upon two musicians whom he had always wanted to work with, Jeff Lorber and Russell Ferrante of the Yellowjackets, to write with and produce his “Oasis” CD. “At the time I didn’t personally even know Jeff or Russell and I was hoping that, when I called them, they wouldn’t say, ‘Eric who?'” It ended up being a great collaboration and one of Eric’s most successful records. It made it into the top 5 on the Billboard Contemporary Jazz Charts and 2 of the tunes made it into the top 10 of the National Contemporary Jazz Radio Charts. Eric went on to record two more records for GRP; “One Touch” and “Street Dance”, both produced by Jeff Lorber.

It was around this time that Eric became interested in writing his first instructional book, “Comprehensive Jazz Studies & Exercises” published by Warner Bros. Publications which is now Alfred Publishing/Belwin Jazz. Eric spent 3 years writing this 200 page book and was inspired by Chick Corea and the members of the Elektric band. “Each member of that band was a prolific writer. Not only music but instructional materials as well. I always wanted to own a book that combined a ton of things to practice and woodshed with some melodic and harmonic things that would really help my improvising.” Alfred publishing went on to publish 2 more books written by Eric. “The Ultimate Jazz Play Along” is a “music minus 1” book for all instruments with 12 original tunes to work on and improve your improvising. It also comes with an audio CD to play along with. The 3rd is called “The Music of Eric Marienthal”. It’s a collection of Eric’s transcribed solos from various records over the last 20 years. This book comes with a “lesson on CD” which takes the listener through the fundamentals of playing, practicing, improvising and much more. Eric has also filmed 3 instructional videos, also published by Alfred Publishing; “Play Sax From Day One”, “Modern Sax” and “Tricks Of The Trade”.

In 1997, Eric was signed by legendary jazz guitarist Lee Ritenour to record for his new label, i.e. Music. Lee produced Eric’s “Easy Street” CD and the title track, which features Rick Braun on trumpet, made it to #2 on the National Contemporary Jazz Radio Charts. That same year Eric was voted to be among the top 3 alto sax players in the Jazziz Magazine Reader’s Poll along with Phil Woods and David Sanborn. Eric’s 2nd record for i.e. Music, “Walk Tall”, was a tribute to one of his musical idols, Cannonball Adderley. “Cannonball has always been a huge inspiration to me and I was so thankful that Lee was into letting me make that record”. Produced by Harvey Mason, the single, “Here In My Heart”, stayed at #1 on the National Contemporary Jazz Charts for 3 weeks and the Cannonball classic, “Mercy, Mercy, Mercy” made it to #5.

Currently, Eric is signed to the Peak Records label, owned by Rippingtons founder Russ Freeman. “When Russ asked me to join the Rippingtons, he also offered me a deal with his label and I jumped at it. Playing with the Ripp’s has been incredibly fun for me and the band is awesome!” Eric’s first 2 recordings on Peak were “Turn Up The Heat” and “Sweet Talk”. The later of which featured the title track that was co-written by Eric’s 14 year old son, Robert. “Rob plays guitar and wrote this song which was originally more of a folk song. After I put my two cents in it turned into more of a smooth jazz tune and I don’t think Rob will ever forgive me!”

Eric’s newest CD is his 3rd for Peak entitled “Got You Covered”. It’s an amazing collection of some of Eric’s favorite tunes and was recorded live in the studio. “Of all 10 of my records, this is my favorite. It features Russell Ferrante, Peter Erskine, Russ Freeman, Chick Corea, Dave Carpenter and Luis Conte. Most of the record was recorded live all together and all at the same time. It was so refreshing to record this way and the music sounds just like we played it.” The record has a very heartfelt, mostly acoustic sound and it’s one that Eric is obviously very proud of.

For the past 7 years Eric has been the musical director of an annual fundraising concert for High Hopes. High Hopes is a non-profit organization in Orange County, California that works with people who have suffered traumatic head injuries. With the help of guest artists such as Lou Rawls, Patti Austin, David Benoit, Brian Culbertson, Rick Braun, Vesta Williams, Jeff Lorber, David Pack, Lee Ritenour and many more, these concerts to date have raise well over a half million dollars for this charity.

Among all the different bands that Eric has been a part of, one of his favorites is the Gordon Goodwin Big Phat Band. Gordon is a very prominent, Grammy winning composer in Los Angeles and the Big Phat Band is among the most popular Big Bands in the world today. Eric is the band’s lead alto sax player and obviously loves being there. “This is about the only band I’ve ever been in that has as much fun traveling together as we do playing together! The audiences always go completely crazy during our shows and they know most of the music we play.” The band is made up of some of L.A.’s top studio musicians. The Phat band’s 3rd record, “The Phat Pack” was recently released in June, 2006. According to Eric, it’s the best record Gordon’s ever made.

These days Eric is touring and recording continuously. Besides playing with his own band and the others that he is a part of, Eric gives Master Classes and performs with High School and College bands around the country. “I love being able to work with students and help them improve. There’s no better feeling than to help a player achieve their goal.”