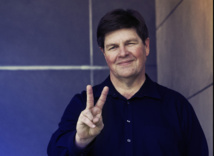 JAY MASON attended California State University, Long Beach, studying saxophone with Leo Potts and flute with John Barcellona. He was a member of that school’s top-rated wind ensemble, jazz ensemble and orchestra. In 1981 he was a featured soloist at the North American Saxophone Alliance national convention, and in 1983 a saxophone quartet in which he played soprano saxophone were finalists in the Coleman Competition for Small Ensembles.

Jay is a member of Gordon Goodwin’s Big Phat Band, and also appears regularly with many other Southern California bands including big bands led by Wayne Bergeron, Les Hooper, John Altman, Chris Walden, Tom Kubis and John Daversa. He has been a member of the Long Beach Municipal Band since 1998. Previously he was a member of the Disneyland Band, and performs with the Pacfic Symphony, the San Diego Symphony, The Los Angeles Master Chorale and the Desert Symphony.
He is active in the Southern California musical theatre scene, performing at venues such as the South Coast Repertory Theatre, Orange County Performing Arts Center and the Ahmanson Theatre. Shows have included such recent hits as Dirty Rotten Scoundrels, A Light in the Piazza, The Drowsy Chaperone, and The Full Monty as well as numerous revivals of classic Broadway shows.

He is active in music education, serving on the faculties of CSU Long Beach and Concordia University-Irvine, and is sought after as a clinican, judge and masterclass presenter. He also directs the critically acclaimed California State University, Long Beach Saxophone Ensemble. Jay is a Vandoren Reed Artist and Clinician, and a MusicMedic/RooPads endorser and artist.