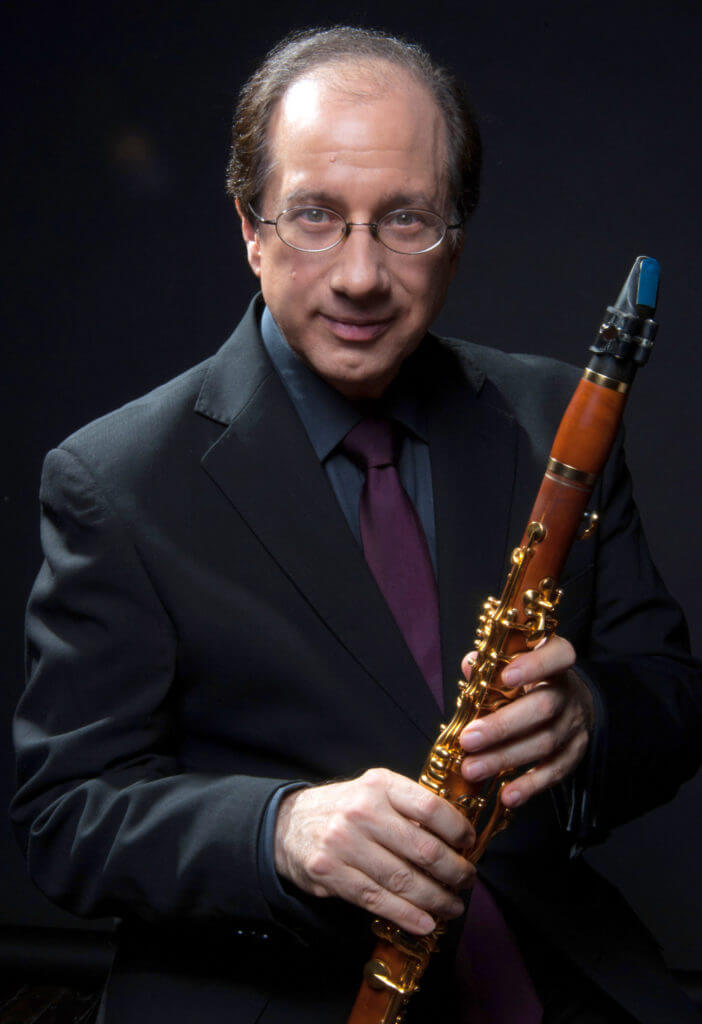 Charles Neidich has gained worldwide recognition as one of the most mesmerizing virtuosos on his instrument. With a tone of hypnotic beauty and a dazzling technique, Mr. Neidich has received unanimous accolades from critics and fellow musicians both in the United States and abroad; but it is his musical intelligence in scores as diverse as Mozart and Elliott Carter that have earned for Mr. Neidich a unique place among clarinetists.  In the words of The New Yorker, “He’s an artist of uncommon  merit — a master of his instrument and, beyond that, an interpreter who keeps listeners hanging on each phrase.”

The start of the 14-15 season will find Mr. Neidich in Tignes, France conducting masterclasses at the International Academy of Music before traveling to Tokyo to conduct the Finals of the Jacques Lancelot International Clarinet Competition with the Tokyo Philharmonic. Upcoming appearances include a performance of Mozart’s Clarinet Concerto with the Gateway Chamber Orchestra and a concert with the Parker String Quartet in Nashville, TN.

In the 2013-14 season, Mr. Neidich appeared in recital at Juilliard’s Morse Hall in New York City. He also teamed up  with esteemed colleagues Mia Chung, piano, Elizabeth Larson and Susan Kim, violins, and Soo Bae, cello to perform a newly commissioned piano quintet, At the Still Point, by composer Christopher Theofanidis, inspired by T.S. Eliot’s Four Quartets and Olivier Messiaen’s Quartet for the End of Time at the W83 Ministry Center. Mr. Neidich joined the String Quartet of Brooklyn under the baton of Tito Muñoz in a performance of Mozart’s Clarinet Concerto before traveling to Dallas, TX to perform in a concert commemorating the death of President John F. Kennedy with the Brentano String Quartet and pianist Seth Koop at the Nasher Sculpture Center, where they debuted  a new work by internationally renowned composer Steven Mackey.

In addition to performing as soloist, Mr. Neidich has in recent seasons, added conducting to his musical accomplishments. He has led the Cobb Symphony Orchestra and Georgia Symphony in performances of the Franck Symphony in D Minor and Mozart’s Clarinet Concerto (also playing the solo clarinet part). Mr. Neidich continues to serve as conductor of the Queens College Chamber Orchestra in Queens, New York City, with whom he has performed the works of Haydn, Mozart, and Beethoven  in historically informed interpretations.

In past seasons Mr. Neidich has appeared in recital and as guest soloist all over the world, and has been making his mark as a conductor. In wide demand as a soloist, Mr. Neidich has collaborated with some of the world’s leading orchestras and ensembles, including the Royal Philharmonic Orchestra of London, Concertgebouw of Amsterdam, the Leipzig Gewandhaus Orchestra, Halle Staatsorchester of Germany, Orpheus, the St. Louis Symphony, Jacksonville Symphony, Pasadena Symphony, San Diego Symphony, New City Chamber Orchestra of San Francisco, Athens Chamber Music Festival, Tafelmusik, the Juilliard, Guarneri, American, and Mendelssohn String Quartets, and the Peabody Trio.

Mr. Neidich commands a repertoire of over 200 solo works, including pieces commissioned or inspired by him, as well as his own transcriptions of vocal and instrumental works. A noted exponent of 20th century music, he has premiered works by Milton Babbit, Elliott Carter, Edison Denisov, William Schumann, Ralph Shapey, Joan Tower, and other leading contemporary composers. With a growing discography to his credit, Mr. Neidich can be heard on the Chandos, Sony Classical, Sony Vivarte, Deutsche Grammophon, Musicmasters, Pantheon, and Bridge labels. His recorded repertoire ranges from familiar works by Mozart, Beethoven, Weber, and Brahms, to lesser-known compositions by Danzi, Reicha, Rossini, and Hummel, as well as music by Elliott Carter, Gyorgy Kurtag, and other contemporary masters.

A native New Yorker of Russian and Greek descent, Charles Neidich had his first clarinet lessons with his father and his first piano lessons with his mother. Mr. Neidich’s early musical idols were Fritz Kreisler, pianist Artur Schnabel and other violinists and pianists, rather than clarinetists. However, the clarinet won out over time, and he pursued studies with the famed pedagogue Leon Russianoff. Although Mr. Neidich became quite active in music at an early age, he opted against attending a music conservatory in favor of academic studies at Yale University, where he graduated with a Bachelor of Arts, cum laude, in Anthropology. In 1975 he became the first American to receive a Fulbright grant for study in the former Soviet Union, and he attended the Moscow Conservatory for three years where his teachers were Boris Dikov and Kirill Vinogradov.

In 1985 Mr. Neidich became the first clarinetist to win the Walter W. Naumburg Competition, which brought him to prominence as a soloist. He then taught at the Eastman School of Music and during that tenure joined the New York Woodwind Quintet, an ensemble with which he still performs. His European honors include a top prize at the 1982 Munich International Competition sponsored by the German television network ARD, and the Geneva and Paris International Competitions. Mr. Neidich has achieved recognition as a teacher in addition to his activities as a performer, and currently is a member of the artist faculties of The Juilliard School, the Manhattan School of Music, the Mannes College of Music and Queens College. During the 1994-95 academic year he was a Visiting Professor at the Sibelius Academy in Finland where he taught, performed and conducted. Mr. Neidich is a long-time member of the renowned chamber ensemble Orpheus.