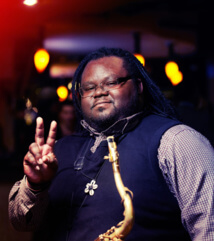 To dedicate a life to the construction and deliverance of music requires not only a tremendous commitment, but also an unparalleled passion for creativity. To wield notes and string them into a breathtaking arrangement of sound and inspiration is a gift that must be perfected daily. With each song created, each note pulled from an arsenal of musical brilliance, musician, composer and arranger, Anthony Nelson, Jr. ignites fans with his melodic originality. Fusing together jazz’s classic tranquility, gospel’s spirituality, funk’s rougher edges and neo-soul’s undeniable velvet ease to produce a sound unlike anything on today’s shelves. A saxophonist, flautist, clarinetist and bass clarinetist, Nelson is blessed with an inherent talent that is boundless in its ability to reach across generational and genre lines.

Possessing a gift that was cultivated from birth, Nelson is an avid student of song, becoming a member of Cantoris, the prestigious boy’s choir of Plainfield, New Jersey. He first picked up the alto saxophone at age 11, continuing on to the tenor saxophone by high school. Because playing the saxophone alone is not enough to warrant the title “woodwindist”, Nelson began to study the flute and clarinet to diversify his range of musical ability. Mentored by organist Radam Schwartz at the Jazz Institute of N.J., Nelson would later be featured on Schwartz’s album Magic Tales.

While his performance skills were created and sharpened growing up playing in clubs, Nelson decided to further his professional studies by enrolling at the University of the District of Columbia. There he was fortunate to study under master arranger Calvin Jones. He later went on to William Paterson University under the tutelage of Gary Smulyan and Vincent Herring.

A formidable talent in his own right, Nelson has graced the stage with an array of phenomenal figures such as Billy Hart, John Hicks and Don Braden. With an ability to float in and out of genres, perfecting his sound in each, Nelson has consciously not tied himself down to any one sphere. He has served as the clarinetist in the quintet of MacAruthur award winner and Grammy nominated violinist, Regina Carter, appearing with her on NPR’s Jazz Set.

Nelson has also been privileged enough to work with a number of talented musicians, ranging in genres. His credit list includes such powerhouse artists as the Ojays, the Duke Ellington Orchestra, Faith Evans, “Joe”, the Ray Charles Orchestra, Henry McKenzie Davis, the Count Basie Orchestra and the Cab Calloway Orchestra Cecil Brooks III and T.S. Monk, to name a few..

Gifted with the ability to both see and feel music, Nelson soon let loose his desire to compose and to released “Testament: Live At Cecil’s”, his debut solo CD, which went stayed on the JazzWeek charts for 10 weeks. Nelson’s latest cd, “Tenor For Two”, went to #25 on the JazzWeek charts. With songs such as Silly, You Came to Mind, and Paula Danielle, Nelson’s genius harkens back to a time when music told a story, uncomplicated by unimaginative beats and technological advances that take away from the song’s soul. Nelson has taken his commitment to producing pure music one step farther with the creation of his own band Grown Folks’ Business.

Touring with the play “The Devil’s Music: The Life and Blues of Bessie Smith”, named one of the top 10 Off-Broadway experiences of 2001 by the New York Daily Times, Nelson’s performance on set as tenor sax and clarinet is an astounding complement to the cast’s extensive range of talent. “The strongest musical impression is made on the tenor sax and clarinet by Anthony Nelson. His expert solos dominate the instrumental accompaniment. Nelson’s choreographed, insinuating duet with Braden’s vocal on “St. Louis Blues” is a musical and visual delight”, boasts one critic.

Throughout his enviable career, Nelson has created a sound that draws on the influences of some of music’s lasting voices such as Coltrane, Gary Bartz, Marvin Gaye and Nancy Wilson, yet, is simultaneously infusing them in such a wonderfully refreshing way that produces a sound unique in every aspect of its inception. Through his dedication to the simplicity of sound and his understanding of how true music can uplift the spirit, Anthony Nelson breathes life into every song crafted and every note wielded, leaving his fans utterly awe struck.