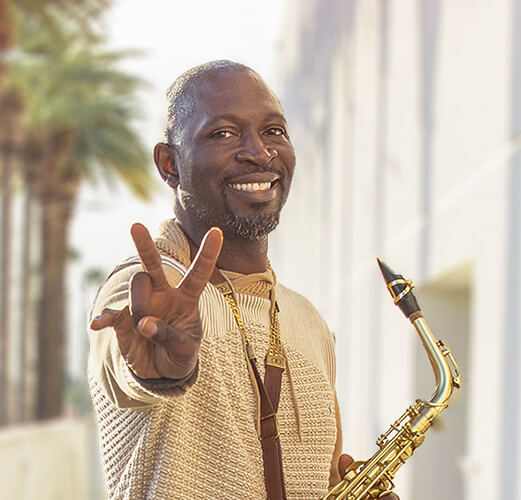 The emergence of saxophonist Mike Phillips marks the beginning of a new, exciting chapter in the jazz music scene. A rare combination of youthful exuberance and seasoned craftsmanship, Mike is poised to take his position among the leaders in his field.
Mike began his musical odyssey at the age of five in his native Mt. Vernon, NY. After experimenting with an assortment of instruments including acoustic and electric bass, violin, piano, French horn and trumpet, he focused on the saxophone because it was the vehicle best suited to express his creative passion.

He diligently honed his talents throughout his formative years, painstakingly mastering the technical skills and self discipline required for the art form. More than that, Mike also developed a keen understanding of the unique and personal relationship between the musician and the audience. Says the young musician: “Music is more than riffs and tricks that you learn. For me, it’s emotional and I want people to feel my music rather than just listen to it.”

In the summer of 1993, Mike made his presence felt on the music scene with his now legendary debut performance at the well-known New York City jazz & R&B spot, Wilson’s. Invited there by a friend who was playing keyboards with the house band, Mike literally walked on stage and, much to the surprise of the band leader, began to blow before anyone asked him to sit in. The looks of bewilderment quickly turned to smiles and the rest, as they say, is history.

Mike has been a regular there ever since, performing with such artists as Babyface, Rachelle Farrell, Brian McKnight, Boyz II Men, and the artist formerly known as Prince. He has also showcased his extraordinary talent via performances throughout the US and abroad, touring with such notables as Teddy Riley & Blackstreet, Jonathan Butler, Simply Red, Wayman Tisdale, Kenny Lattimore and the incomparable Stevie Wonder.

In 1996, Mike was invited to perform at President Clinton’s Inaugural Gala held at The Kennedy Center in Washington, DC. Other milestone events include the 80th Birthday Celebration for President Nelson Mandela in South Africa, a Superbowl appearance with Wonder, and the Billboard Music Awards. Mike’s television credits include Saturday Night Live, The David Letterman Show, BET On Jazz, BET Sound Stage, and The Tonight Show.

Mike’s artistry exceeds category, as shown by his recording sessions with an assortment of diverse performers including the late rapper Notorious B.I.G., mega movie star and recording artist Will Smith, vocalist Mariah Carey, and the gospel ensemble Anointed. And his collaboration with Teddy Riley on the Rugrats The Movie soundtrack added yet another dimension to the phenomenal sound and career of Mike Phillips.

Driven to be the very best, Mike has resolved to follow in the path of his mentors, the legendary saxmen Dexter Gordon, John Coltrane and Charlie Parker, and take his genre to another level. This determination to develop his craft has helped him reconfigure the jazz landscape by infusing blues, gospel and hip-hop elements into a refreshingly unique style. Mike’s Hidden Beach project, his first solo offering, is due later in 2001.