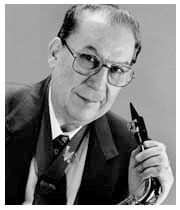 Born in Rosario, Argentina in 1936, Hugo Pierre studied clarinet at Rosario’s Municipal Conservatory from 1945 to 1955. In 1955, at age 19, he arrived in Buenos Aires and began to work professionally with the orchestra of Héctor Lagna Fietta. At the same time, he studied harmony with Erwin Leuchter and jazz instrumentation and arrangements with Juan Carlos Cirigliano. In addition to formally studying the clarinet for ten years, he had self-taught himself the saxophone. In 1956, he connected with the jazz musicians of Buenos Aires who assiduously converged at the then-famous Bop Club, including Chivo Borraro, “Gato” Barbieri, Lalo Schifrin, Baby López Forst, and Pichi Mazzei. Since then, Pierre has been an integral part of different jazz combos and orchestras conducted by Lalo Schifrin, Buby Lavecchia, Pocho Gatti, and many others.

Pierre accompanied Edith Piaf and Nat King Cole, and was a member of Xavier Cugat’s orchestra, with whom he traveled through South America, visiting Chile, Peru, Ecuador, Columbia, and Venezuela. When Arthur Fiedler directed the Buenos Aires Philharmonic Orchestra, Pierre made his debut as a saxophonist in a symphonic orchestra, playing “Porgy & Bess.” Since that time, he has played with the Philharmonic Orchestra, the Teatro Colón Symphonic Orchestra, and the National Symphonic Orchestra, playing alto, tenor, and soprano saxophones (in accordance with the works). He also played with the Philharmonic Orchestra under the direction of Leopold Hager when Richard Strauss’ operas “Elektra” and “Salomé” were performed in Buenos Aires, playing clarinet (in “Salomé”) and basset horn (in “Elektra”). In addition, Pierre played clarinet in the National Symphonic Orchestra, which was directed at different times by Jacques Singer, Serge Bodeau, Pedro I. Calderón, John Carewe, and Rinus Michaels. Pierre was a member of the Channel 13 television staff orchestra, accompanying such names as Tony Bennett, Libertad Lamarque, Mina, Milva, Van Johnson, Ginger Rogers, Elsa Martinelli, and many others. In 1983/84, he toured Europe, Asia, and Australia with Julio Iglesias. From 1988 to 1994, Pierre was a member of “The Elastic Band,” which played successfully in Argentina, Brazil, Uruguay, Paraguay, and Chile and recorded three albums. In 1996, he founded the Hugo Pierre Saxophone Quartet, which has given recitals in Buenos Aires and several provinces. His jazz quartet has performed in Argentina, Chile, and Paraguay. As an educator, Pierre has taught in the jazz program at the School of Popular Music of the Province of Buenos Aires and from 1987 to 1996, he was a professor of saxophone at the National Conservatory of Music. Since 1988, he has taught clarinet at the Catholic University of Argentina (U.C.A.).