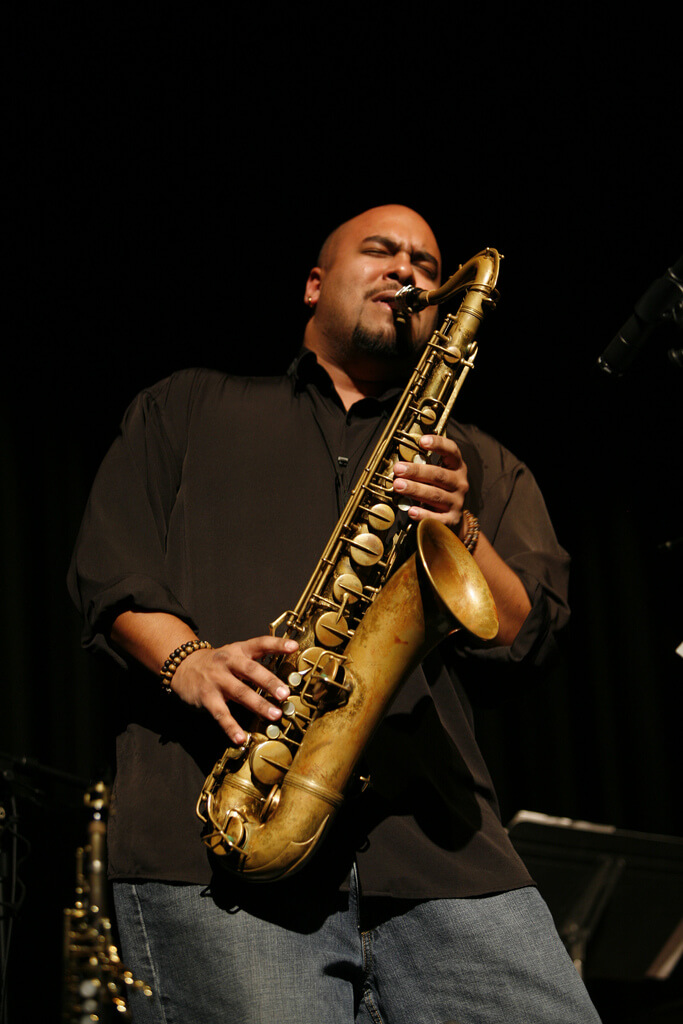 Hailing from the remote location of Perth, West Australia, saxophonist Troy Roberts has received numerous accolades including 3 DownBeat SM Jazz Soloist Awards, 2 Grammy Nominations, and was semi-finalist in the 2008 Thelonious Monk International Jazz Saxophone Competition. Graduating with a Bachelor of Music at the young age of 19, he has performed around Europe and the US extensively with artists such as Jeff ‘Tain’ Watts, Joey DeFrancesco, James Morrison, Aretha Franklin, Van Morrison, Christian McBride, Sammy Figueroa, Dave Douglas, Orrin Evans and Kurt Elling to name a few, and also completed a Masters Degree at The University of Miami.

In 2012, he shared the stage in an international septet comprised of jazz giants Wayne Shorter, Richard Bona, Vinnie Colaiuta and Zakir Hussein for Herbie Hancock’s launch of International Jazz Day at The UN, NYC. He was also part of Hancock’s 2014 International Jazz Day held in Osaka, Japan performing with jazz luminaries such as Gregory Porter, Marcus Miller, Esperanza Spaulding and John Scofield.

Troy is based in New York City, maintains a busy performance and recording schedule around the globe with some of the greatest jazz artists of today, and is currently celebrating his 12th release as a leader, Stuff I Heard (Toy Robot Music).

“Roberts’ music seems to have been crafted by a superior musical intellect with a grasp of history and context as well as a sense of time and place, and – above all a sense of poetry, the ability of a storyteller and a wonderful sense of timing.” – Raul DaGama

“Stuff I Heard is full of beefy horn sections, with an energy that suggests what you might hear from big band jazz. If you didn’t know the story behind this album, you’d probably guess that a quartet or quintet were playing at the very least. That’s impressive enough, but it’s the music that matters here. And in this case, it’s superb.” – The Vinyl Anachronist

“Troy Roberts possesses a robust flexibility and dexterity that serves as a very convincing sonic calling card. He has successfully managed to forge a stunning and a most personal approach on every selection and is propelled even deeper into the soul of the compositions by a relentless and driven sense of purpose.” – Greg Osby

“Roberts is a boisterous and effusive player, conversant but not busy. ‘Secret Rhymes’ has a bounce to it and Roberts excels here as a leader, with an awesomely arranged album with just a touch more arch than one can legally call straight-ahead.” – DownBeat Magazine

“Whilst it’s not common to display virtuosity, it’s even rarer to be wonderfully creative while doing so. But the rarest of all gifts is to have a unique voice; a sound that is unmistakably your own, Troy Roberts has this gift. He amply demonstrates that it’s possible to pay homage to the great tenor players of jazz and still create a fresh approach that leaves the listener always in anticipation of what he’ll come up with next.” – James Morrison

“Roberts, though young in age, certainly has an arsenal of abilities under his belt, and has the makings and foundation of a lasting great saxophonist. Versatile in style, with a strong grasp of yesterday and today, he is a force to be reckoned with no matter the setting. He is more than one to watch, he is one to follow closely.” – JazzTimes Magazine

“He’s not reaching out into the wilderness and grabbing something brand new, as most specialists in jazz improvisation. Instead he’s going back and finding out what no one else noticed on the first pass. His melodies and themes aren’t alien to jazz fans, but they always seem like they’re being approached from a different direction. This sounds like great jazz from the past, but it also suggests new directions with every note.” – The Vinyl Anachronist

“Substance and style will triumph over pretentiousness and ego every time. Roberts has a resume that will certainly make one sit up and take notice having shared the stage with such luminaries as Nicholas Payton, Orrin Evans and John Clayton. Nu–Jive 5 is Roberts fifth release as a leader and is brimming with vitality and that certain pop of originality that separates the “artist” from the “musician.” – Critical Jazz