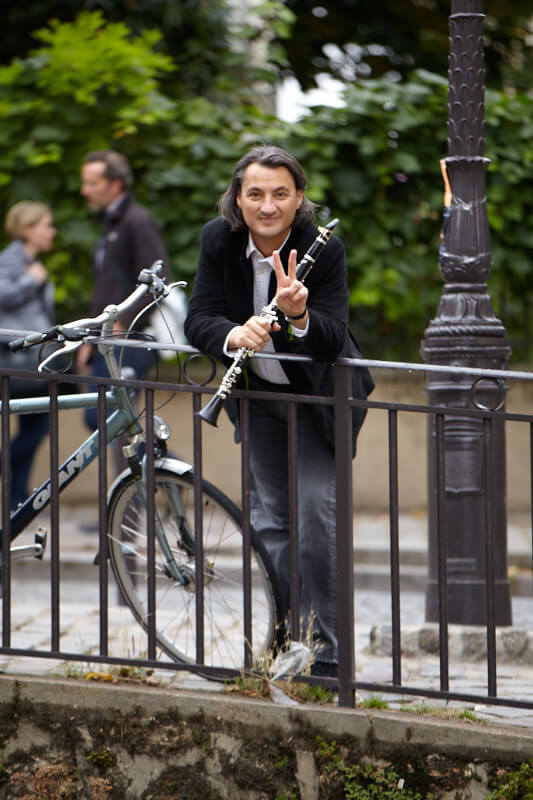 Florent Héau studied at the Paris Conservatory (CNSM de Paris) in Michel Arrignon’s class. After having received several First Prizes between 1991 and 1995 in international competitions, Florent Héau has quickly established himself as one of the most important figures of the French clarinet school; a brilliant tradition he himself relentlessly perpetuates worldwide, by both giving concerts and master-classes.

Florent Héau has contributed to several premieres such as “Chant des Ténèbres” (concerto for clarinet and orchestra) by Thierry Escaich, “Aizgor” by Félix Ibarrondo, “Sonatina lapidaria” by Nicolas Bacri and “Encore” de Karol Beffa. In 2011, he premiered Philippe Hersant’s clarinet concerto with the Orchestre de Bretagne.

In addition to being an exceptional musician, Florent Héau is also a skilled showman, whose multiple talents are revealed through performances with “Bons Becs” a musical theatre ensemble with whom

he not only plays the clarinet and the ‘musical saw’, but also tap dances.

Over the years, he has enjoyed continuous success with his recordings of various programs, including Sonatas by Brahms and Reger (with Patrick Zygmanowski), the Trios of Beethoven (with Jérôme Ducros and Henri Demarquette), pieces for clarinet and strings by Nicolas Bacri, the chamber works of Mozart (with Manfred Quartet) and Mozart’s Clarinet Concerto (with the Prague Chamber Orchestra, Guastavino and Piazzolla (with Marcela Roggeri).

His most recent recording with Pernoo, Ducros and the Voce quartet is dedicated to Brahms (trio and quintet).

A renowned teacher, Florent Héau is clarinet professor at the Paris CRR and Lausanne HEMU, and guest professor at the Osaka College of Music in Japan and Shanghai Conservatory of music in China. He is regularly invited to teach in many countries in Europe, Latin America and Asia.