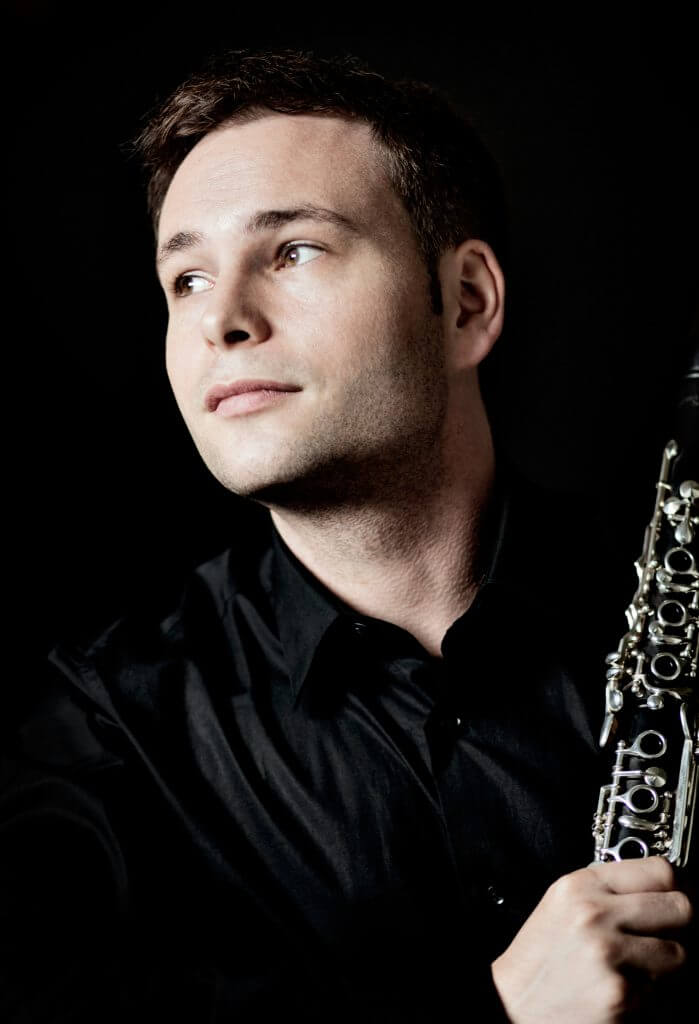 «Nicolai Pfeffer is an excellent clarinettist and a sensitive musician, someone who plays with both technical command and a captivating musicality.» – Alfred Prinz

Nicolai Pfeffer «presents strong dynamic contrasts, a richness of colour, sensitivity and passion,» summed up the magazine ‘The Clarinet’, and the reviewer of DER SPIEGEL also recently raved about the «colourfully iridescent clarinet sound of the highly virtuoso wind player,» who is now one of the most sought-after soloists, chamber musicians and teachers of the younger generation. He has also gained international recognition with his text-critical new editions of famous clarinet works and numerous of his own clarinet arrangements of well-known compositions, which have been published by such renowned publishers as Henle, Breitkopf & Härtel and Peters.

In his hometown of Fulda, the clarinettist received his first clarinet lessons from Bruce Edwards at the age of twelve. He was particularly encouraged early on by the Bamberg instrument makers Werner Schwenk and Jochen Seggelke, whose brilliant clarinets he still plays today. He studied in Ralph Manno’s studio at the Hochschule für Musik und Tanz Köln and completed his Master’s degree «with distinction» in solo and chamber music in 2011. Guest studies at Indiana University Bloomington with Howard Klug and Alfred Prinz as well as a large number of international master classes and chamber music courses were further stages in his education. He also received important artistic impulses from Sabine Meyer in Lübeck, Sharon Kam in Hanover, Charles Neidich in Bamberg, Anthony Spiri in Cologne, Karl Leister in Berlin and Sir Alan Hacker in London.

Nicolai Pfeffer has gained a reputation both as a soloist and as a passionate chamber musician as a stylistically confident, virtuoso clarinettist. In 2018, Nicolai Pfeffer made his debut as soloist in Rossini’s Clarinet Concerto with the Orchestra of La Scala, Milan, under Maestro Fabio Luisi. He has enjoyed a vibrant artistic collaboration with pianist Felix Wahl for many years.

Nicolai Pfeffer has also performed in the most important concert halls in Germany as well as at numerous well-known festivals in Europe, the USA, South America and the Middle East. Among others, he has performed with the pianists Michail Lifits, Kit Armstrong, Michel Dalberto, the violinists Ida Bieler, Yury Revich, Christian Tetzlaff and Niklas Liepe, the cellists Leonid Gorokhov and Benedict Klöckner as well as with the singers Ingeborg Danz and Maria Aleida. As a solo clarinettist, he has appeared as a guest with the Cologne Opera, the Deutsche Kammerphilharmonie Bremen, the Athens State Symphony Orchestra, the Tbilisi Symphony Orchestra Georgia, the Kammerakademie Potsdam, the Györ Symphony Orchestra, the Frankfurt Radio Symphony Orchestra and the Bamberg Symphony Orchestra. Radio and television recordings have taken him to Sky Classica, Rai3, SRF and various ARD broadcasting stations.

After his debut CD with works by Robert Schumann (Soiréestücke, first recording), Max Reger (Sonata op. 49 No. 2) and Alban Berg (Vier Stücke op. 5), a recording of the two Sonatas op. 120 by Johannes Brahms followed in the Brahms Year 2017 together with Felix Wahl (CAvI Music), which was highly acclaimed by the critics. In 2021 Pfeffer released a CD recording of Mozart’s Clarinet Concerto together with Markus Stenz and the Orchestra della Toscana from Florence as well as a recording of Johann Stamitz’s Clarinet Concerto together with the Greek-German conductor Ektoras Tartanis and his ARGO Ensemble on period instruments.

Nicolai Pfeffer is an esteemed pedagogue: since 2013 he has been teaching clarinet (BA/MM) and didactics at the Hochschule für Musik und Tanz Köln. Since 2016, he has also taught clarinet didactics and methodology at the Hanover University of Music, Drama and Media and at the Bremen University of the Arts. Within the Pre-College Cologne (HfMT Cologne), Nicolai Pfeffer is committed to the intensive support of musically highly gifted children and young people.

Orchestrations of Italian opera fantasies personally crafted by Pfeffer premiered last season in 2019/2020 with the Dubrovnik Symphony Orchestra, the Israel Chamber Orchestra and the Israeli Raanana Symphonette. Further performances followed, among others, at the Berlin Philharmonie, the Liederhalle Stuttgart and the Munich Prinzregententheater with the Camerata Salzburg as well as at the Rheingau Music Festival.