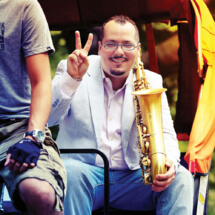 Born in the countryside of Augusta, GA in the “Deep South”, Dease played the saxophone and trumpet before choosing the trombone at age 17. In 2001, Dease moved to New York City to become part of the historic first class of jazz students at The Juilliard School, earning both Bachelors and Masters degrees. Dease quickly established a reputation as a brilliant soloist and sideman, recording 4 albums as a leader and over 100 sessions as a sideman, all before the age of 30.

Dease is a sought-after and two- time GRAMMY-award winning lead, section and bass trombonist with today’s leading jazz orchestras, including those led by Christian McBride, Roy Hargrove, Nicholas Payton, Charles Tolliver, Rufus Reid, Jazz at Lincoln Center Orchestra and the Dizzy Gillespie All-Star Big Band. However, it is on the frontline of quintets and sextets led by master musicians like The Heath Brothers, Winard Harper, Renee Rosnes, Bill Charlap, Claudio Roditi, and Lewis Nash, where Dease has revitalized the trombone’s image. Not content to simply improvise, Dease arranges and composes for many different bands and constantly adjusts his tone and timbre to add just the right flavor to the music.

Michael’s singular talent has made him an effective, prolific teacher, resulting in invitations, master classes and residencies at University of North Texas, Scranton University, University of Iowa, Florida State College, Broward College, and many institutions abroad. He teaches jazz trombone at the renowned Michigan State University jazz program, and has also been on faculty at Queen College CUNY, The New School and Northeastern University. Many of Michael’s current and former students enjoy successful careers in the music world.