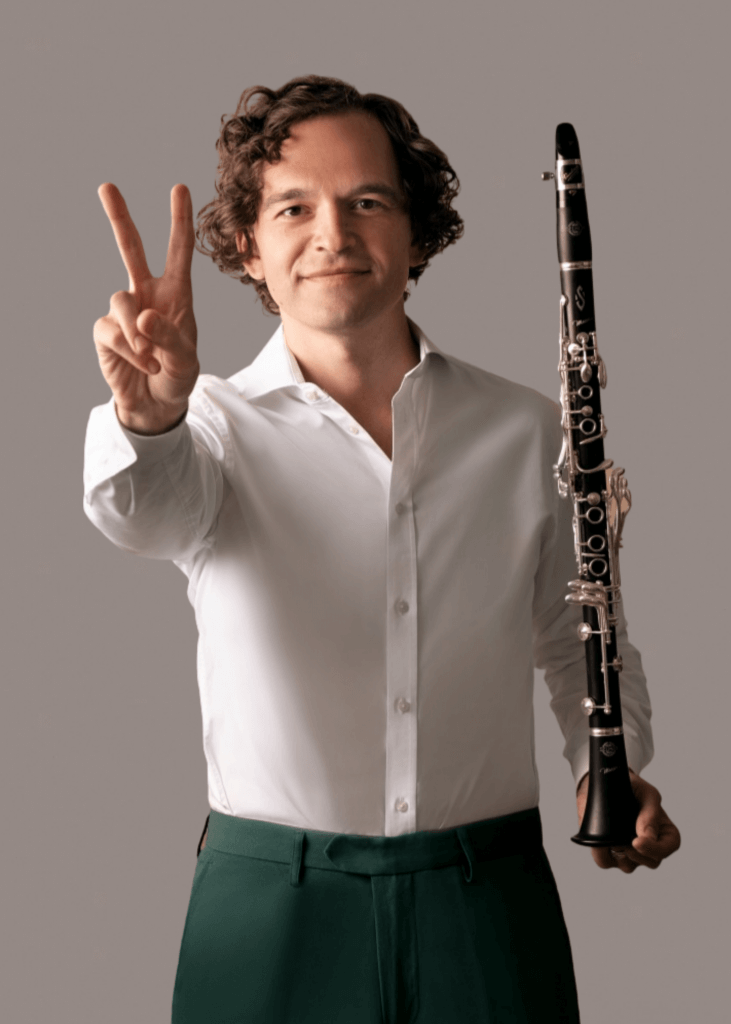 With a charismatic blend of technical flair, polish, and grace, Portuguese-Canadian clarinetist Wesley Ferreira draws in audiences with his unabashed joy and passion for storytelling through music. Unafraid to display his uniqueness and originality, Wesley is widely considered a gifted expressionist whose engaging personality connects with people in an authentic and meaningful way. Equally at ease performing the masterworks as well as contemporary repertoire, he has been praised by critics for his “beautiful tone” and “technical prowess” (The Clarinet Journal) as well as his “remarkable sensitivity” (CAML Review). Fanfare Magazine notes, Ferreira is “clearly a major talent”.

As a recital clarinetist, his performances continually engage, provoking the Artistic Director of one recent concert series to remark that Ferreira “showcased a potent synthesis of serious musicianship, technical ferocity, and bravery of programming that was effectively tempered by a dynamic flair for showmanship. With this performance, Ferreira proved not only is he an artist of some consequence, but also a consummate showman capable for presenting even the most challenging works with the ease and fluency of a world-class player”.

Wesley leads an active and diverse career performing worldwide as soloist, orchestral and chamber musician, and as an engaging adjudicator, and clinician. Recent performances have taken him to Austria, Brazil, Canada, China, Ecuador, France, Germany, Hungary, Italy, Poland, Portugal, Russia, Slovakia, and Spain. Additionally, he has been been broadcast nationally on RTP television in Portugal and on radio with the CBC in Canada and ABC in Australia. Currently based in the United States, he is part of the renowned faculty of Colorado State University’s School of Music, Theatre, and Dance (SMTD) where he maintains a thriving clarinet studio. Additionally, he is co-founder and artistic director of the Lift Clarinet Academy, a summer music festival and training institute which attracts students from around the world.

Wesley aims to live a life inspired by artistic and personal growth and to positively influence those around him. It comes as no surprise then his earned reputation as a skilled, dedicated, and imaginative educator. Certainly, his innovative teaching methods and outreach are acclaimed, including the development of the breath support training program for musicians, Air Revelation. Through knowledgeable instruction that integrates pedagogy, psychology, and philosophy, Wesley develops self-confidence in his students, empowering and mentoring them towards the achievement of career goals and unlocking their potential to become expressive, committed, and fearless performers in their own right. His teaching philosophy focuses on the whole human being, working to integrate musician – human – artist.

Wesley continues to be deeply impacted by his heritage and unique upbringing. In fact, he credits much of his confidence, perseverance, and independent streak to the collective spirit of his immediate ancestors, all of whom hail from the Açores, a set of archipelago islands located in the middle of the Atlantic Ocean. Born in Canada, Wesley grew up in an immigrant family within a tightly-knit Portuguese community, participating fully in the musical and traditional customs of the diaspora. A third-culture kid (TCK), his entry into music was through the Portuguese bandas filarmónicas tradition. From these humble beginnings Wesley has risen to impressive heights, paying homage to his past along the way. He has released three Portuguese-themed recordings including the 2019 solo album Arrival (on Centaur Records) which features works from prominent Portuguese composers. This advances his doctoral research of curating works for clarinet which included Portuguese folk elements. Indeed, as a means of artistic growth and furthering scholarship, Wesley demonstrates avid support for new music by frequently commissioning and premiering works, and he continues to champion Portuguese music in North America.

As a recording artist, with nine albums to his credit including the 2013 East Coast Music Awards winner – Classical Recording of the Year, and 2015 International Portuguese Music Awards winner in the Instrumental Category, he continues what he describes as his fruitful exploration of the recording art form. Wesley has two forthcoming albums currently in production including one featuring solo works for clarinet and electronics and the debut album of his clarinet and guitar duo Jâca. Through this uncommon pairing of instruments, Jâca combines classical and world music to bring an adventurous, passionate, and completely original musical style to the stage. However, it is not only through these avenues that we see Wesley’s exploration of increasingly stimulating projects and challenges. Of note, he has accepted the role of Artistic Director of the ClarinetFest® 2023 conference, a major event celebrating the 50th Anniversary of the International Clarinet Association. Undoubtedly, Wesley’s commitment to collaboration and advancing his field is further demonstrated when he was tapped by Selmer Paris in 2017 to be a lead consultant and team-developer on a new line of clarinets. In October 2021, the Muse professional clarinet was released to critical acclaim, and Wesley could not be more proud.

Wesley received his advanced musical training at the University of Western Ontario (B.M) and Arizona State University (M.M. and D.M.A) studying with Robert Riseling and Robert Spring, respectively. His industry endorsements include positions on the performing artist rosters of Selmer Paris and Vandoren.