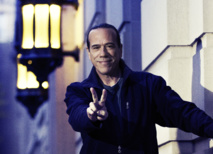 Saxophonist Dan Moretti’s musical career has spanned over the last 30 years. He started playing tenor saxophone and clarinet at the age of 12. The following year, he was included in the all-state Rhode Island Youth Stage Band where he played the Newport Jazz Festival in 1966. In 1975, Dan received a Bachelor of Science with a double major in arranging and composition and music education from the Union Institute & University in Cincinnati. In the 1970s, he played local and national gigs, and taught privately in the local school systems and music schools in the Southern New England area. By 1981, he became a recording studio owner, honing his engineering and producer skills as well as focusing on his composing skills. In 1985, his first jazz album, Sometime Inside, was released internationally on Blackhawk Records. Dan has toured throughout the United States, Europe, Africa, and Russia, and has traveled as far east as India performing and presenting clinics and seminars. His musical influences range from jazz and classical to funk and Latin jazz. Since the late 1970s, he has performed or recorded across the spectrum of music with artists such as Aretha Franklin, The Temptations, Mike Stern, Dave Samuels, Dave Liebman, Marvin Stamm, and The Crusaders. He feels as comfortable playing straight-ahead jazz as well as Latin, funk, and soul.
Dan is a full time Professor at Berklee College of Music in Boston, and has been on the faculty since 1996. He was given the school’s Curriculum Development Award in 2006 for his popular on-campus course, Groove Writing. Dan is also on the faculty of Berkleemusic.com – Berklee’s distance learning school – where he teaches an online version of his course, titled Arranging Contemporary Styles, to students all over the world. In 2008, his book Producing and Mixing Contemporary Jazz was released on Hal Leonard-Berklee Press. In 2009, Dan was awarded the prestigious MacColl-Johnson fellowship for jazz composers, which enabled him to write and produce a project with an Italian traditional orchestra called Piccola Orchestra La Viola (POLV), bringing together his musical and Italian roots.
Since 2002, Dan has been active in Europe and the United States performing with artists like Nile Rodgers and CHIC, performing his own music, and presenting seminars in Italy, Turkey, England, Belgium, Holland, France, and Switzerland. In the summer of 2006, he also had the opportunity to perform in the house band at the 40th anniversary of The Montreux Jazz Festival tribute to Atlantic Records with Nile Rodgers; which included Dan writing charts and backing up Robert Plant, Stevie Nicks, Chaka Khan, Kid Rock, George Duke, Solomon Burke, and Steve Winwood. In 2013, Dan circled the globe in support of Nile Rodgers’ four Grammys and his number one hits with Daft Punk touring China, Malaysia, Singapore, Australia, and Europe.
Dan has released 17 albums internationally. Dan and The Piccola Orchestra La Viola released The Journey in 2011 in Europe. In 2014, Dan released his album Dan Moretti & The Hammond Boys, a live soul-jazz recording on Roots Grooves Records. It hit number 13 nationally on CMJ, and continues to receive airplay and good reviews.