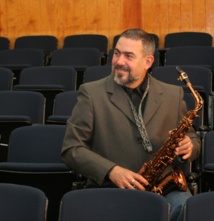 Graduated from the Instituto Superior de Arte in Havana, Cuba in 1989, under the guidance of Professor Miguel Angel Villafruela (First prize at the National Conservatory of Music Paris); Concluded the Master Degree in Interpretation Music at the National School of Music (UNAM) in 2006. He recorded an album as soloist with the Symphony Orchestra of Camagüey, in 1989. He founded the renowned Havana´s Saxophone Quartet, with which he toured in France in 1990. He also organized the First and Second National Meeting-Workshop of Saxophone (Cuba) in 1990 and 1992. He was founder of the National Symphony Music Commission and becomes part of the National Union of Writers and Artists of Cuba (UNEAC) in 1993. Besides, he plays as a soloist with the Symphony Orchestra of Maracay, Venezuela, and the string quintet « Union » in 1995. He was founder of the School of Music of the State of Tlaxcala, Mexico in 1996. He teaches at the National School of Music (UNAM) since 1997 in Mexico city. He taught performance courses at the School of Music of the Autonomous University of Puebla in 1998, and at various universities in Mexico:  UNICACH (Chiapas), UANL (Nuevo León), UASLP (San Luis Potosí), the Conservatory of Puebla, as well as at the ESMAE, Oporto, Portugal. In 2001, he founded and directed the saxophone quartet « Eclipse ». From 2002 through 2013, he has been Coordinator of the International Saxophone Universitary Meeting in Mexico (UNAM). In 2003, he published Saxophone Methodological Guide, recorded « Eclipse 69 », and toured Paris, Frankfurt and, Belfort. He was international soloist in the West Coast Clarinet Congress, in 2005. He published the book Chromatic Scales in Saxophone Practice, in 2006. He has been guest professor at special courses “Instrumenta tradición”, Oaxaca. He has played concerts and recitals in major halls of the Mexican Republic. He specializes in saxophone and chamber music professor. He won the second prize in the National Contest of Music « Amadeo Roldán », Cuba, in 1978. In 1983, he was granted award for the best national educational work, at La Havana, Cuba. He was granted a mention in the First National Pedagogical Cycle, Cuba, in 1988. Currently, Roberto is part of the saxophone quartet « Anacrúsax, » with which he has already recorded two albums. He is a member of the board of ALASAX 2013.