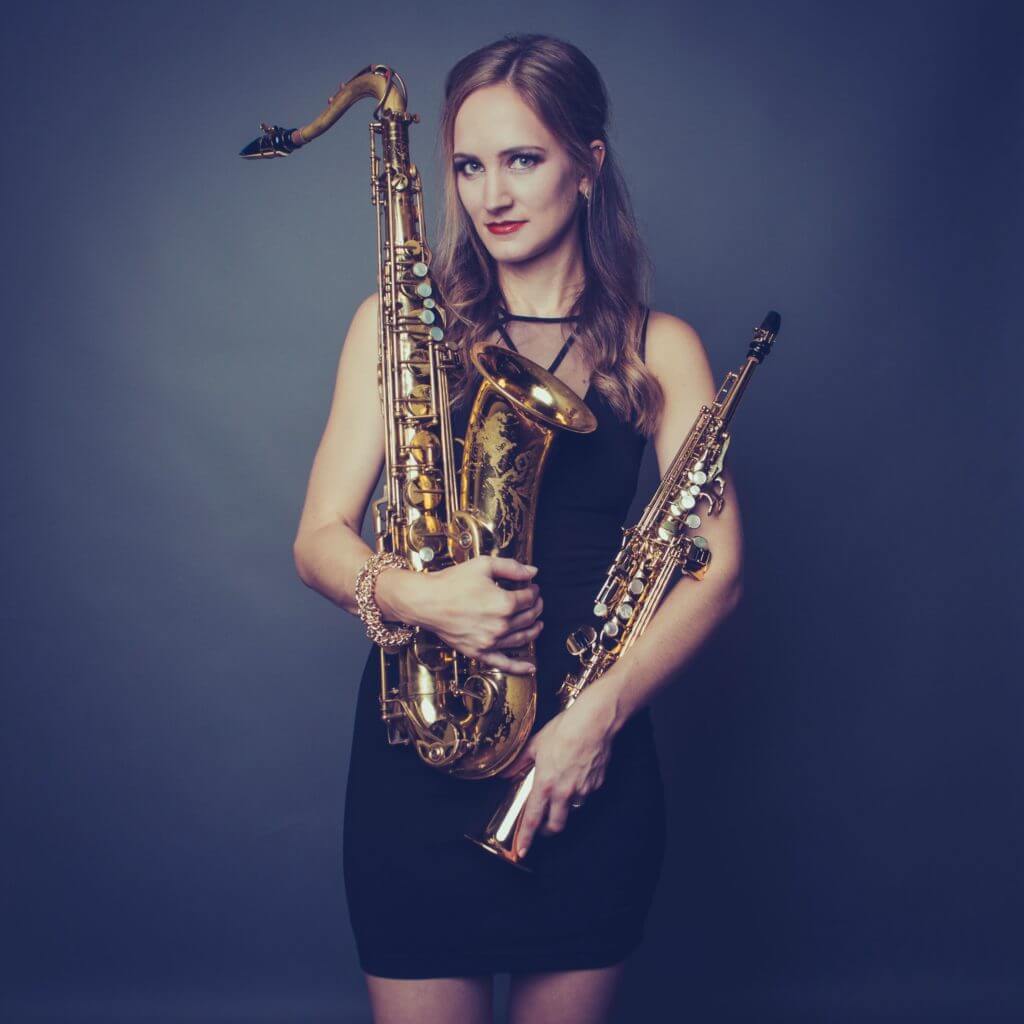 Musician, Composer, Bandleader, Recording Artist, Educator and Activist Roxy Coss has become one of the most unique and innovative Saxophonists on the scene. Winner of a 2016 ASCAP Herb Alpert Young Jazz Composer Award, the Downbeat Critics’ Poll listed her as a « Rising Star » on Soprano Saxophone the past five years in a row, and a Downbeat Magazine review called her « An exceptional young talent”. Originally from Seattle, and a fixture on the New York scene for over ten years, she has headlined extensively around the world, including major festivals and venues like the Newport Jazz Festival, Melbourne Big Band Festival, Earshot Jazz Festival, San Jose Jazz Summerfest, Ballard Jazz Festival, The Jazz Standard, and Jazz Showcase, among others. Her band, the Roxy Coss Quintet, has held residencies at New York City clubs including SMOKE Jazz Club and Club Bonafide, appears frequently around NYC, and tours nationally. Roxy was a featured guest musician on the television show Harry in 2017. She is also the Founder of Women In Jazz Organization (WIJO), and serves on the Board of Directors of Jazz Education Network (JEN).

In March 2018, Coss released her fourth album as a leader, The Future Is Female (Posi-Tone), follow-up to Chasing the Unicorn (2017), also on Posi-Tone. The Future Is Female received a 4.5-Star Review from both Downbeat and All About Jazz, and Chasing the Unicorn made the “Best of 2017” lists in Downbeat, Somethin’ Else Reviews, and Ken Franckling’s Jazz Notes. Past albums also include Restless Idealism on Origin Records (2016), and Roxy Coss (2010).

Coss has performed as a side musician with Jazz greats including Clark Terry, Louis Hayes, Rufus Reid, Billy Kaye and Claudio Roditi. She was a member of trumpeter Jeremy Pelt’s group from 2012 through 2014, and toured with the MACKTET, co-led by Pelt and drummer Willie Jones III. She has been a member of The Diva Jazz Orchestra since 2010, and was a member of the Off-Broadway hit, Maurice Hines is Tappin’ Thru Life . Past performance experience also includes Wynton Marsalis, Buster Williams, Joshua Redman, Joe Lovano, Mulgrew Miller, Harry Allen, Steve Wilson, Mark Gross, Gary Smulyan, Harold Mabern, Jerry Vivino, Eric Marienthal, and Ken Peplowski, among others.

Roxy first started playing piano at the age of five, where she learned the basics of music theory, composition, and ear training through the Robert Pace method. She picked up the saxophone at age nine, and fell in love with Jazz by eleven, playing in her middle school jazz band under the tutelage of Robert Knatt. Roxy graduated in 2004 from Garfield High School, where she toured and performed internationally with the world-renowned GHS Jazz Ensemble, led by Clarence Acox. Roxy went on to attend William Paterson University, where she graduated on a full scholarship Magna Cum Laude in 2008, with a Bachelor of Music in Jazz Studies/Performance. In 2011, she was chosen to participate in both the prestigious Betty Carter’s Jazz Ahead Residency Workshop at the Kennedy Center, and the acclaimed Steans Institute Jazz Program at the Ravinia Festival, where she worked closely with Rufus Reid, Curtis Fuller, Nathan Davis, George Cables, and David Baker. Roxy has also studied Saxophone privately with Rich Perry, Gary Smulyan, Donny McCaslin, and Mark Taylor, Composition with Rich DeRosa, Improvisation with Harold Mabern, Armen Donelian, and Bill Mobley, and Flute/Composition with Anne Drummond.

As a composer, Roxy has collaborated with her mother, Seattle visual artist Mary Coss, to create the soundtrack entitled Eternal, for an exhibition at METHOD Gallery (Traces, 2015). She was also commissioned by the Daniel Gwirtzman Dance Company to write the score for Breaking, a one-man dance piece (2009), as well as Tribe, a full-length dance show choreographed on commission by the Holocaust Museum of New York City (2010).

As an educator, Roxy has over 17 years of experience with students of all ages. In addition to private instruction, she has led Masterclasses around the country, including Western Michigan University, Arizona State University, Jazz at Lincoln Center, and Seattle’s JazzEd. Roxy has served as an adjudicator for both the Northern Arizona University and Bellevue High School Jazz Festivals, and for the 2018 Vandoren Emerging Artist Competition. She regularly performs with teaching programs such as Jazz For Young People at JALC, Let Freedom Swing! at JALC, Jazz and Business Leadership Workshops at JALC, JazzReach led by Hans Shuman, and Generation Vandoren. She has also held faculty positions including Adjunct Woodwind Teacher at Ramapo High School in NJ, Director of Jazz Ensemble at Beacon High School in NYC, William Paterson University Summer Jazz Workshop, and New York Summer Music Festival. Roxy has appeared as a guest teacher at Queens College, “JazzGirls Day” at JALC, Seattle JazzEd’s “Girls Jazz Sleepover”, and at The Jazz Academy of Music. She has also done guest lecture spots at universities such as The New School (Jazz School), University of North Texas (Jazz Dept), and University of Manitoba (Jazz Dept).

Roxy is the Founder of Women In Jazz Organization, a collective of over 300 professional jazz musicians who identify as women or non-binary. WIJO intends to help level the playing field, so that women and non-binary people have equal opportunity to participate in and contribute to the jazz community, leading to an improved and more rich, diverse, and successful art form. The organization is committed to honoring Black Americans as the creators of jazz. WIJO is largely a New York-based organization, with connections to other individuals and groups nationally and internationally. The organization aims to empower the individuals within, as well as come together to empower the larger community of jazz musicians who identify as women or non-binary as a whole. Members of the organization work to address inequalities in jazz culture to change the landscape of the current jazz scene. The organization also works to improve the perceptions and treatment of women and non-binary people in jazz from outside the jazz community.