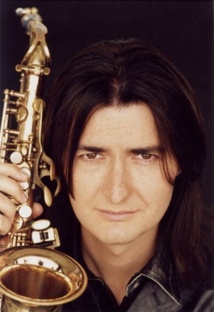 Born and raised in Toronto, Canada, Warren Hill began his musical journey on the guitar and vocals at the age of 7. In his first lesson, his guitar teacher simply asked him “tell me your favorite songs and I’ll teach you how to play them” It was this simple question that set the stage for Warren’s entire musical future: playing the music that he loved.

Within a couple of years he had a songbook the size of an encyclopedia and a growing desire to learn more music. This desire led him to a music camp where he met bassist and hit music producer Matthew Gerrard. At age 14 and 15, the two formed a rock band performing shows all over Toronto. Eventually Warren began to incorporate his growing desire for the saxophone into the band, which led Gerrard and Hill to Rochester for a summer music camp at the acclaimed Eastman School of Music. Warren brought both his guitar and his sax, but once he arrived, someone played him a cassette with Charlie Parker, Miles Davis and John Coltrane. Warren was instantly hooked on this undiscovered style of music called “jazz”. During that summer, he was so engrossed with the sax that his guitar never left the closet! From there it was back to Toronto where he quit his rock band and formed a fusion group, playing Weather Report, Pat Metheny, Spyro Gyra, Grover Washington Jr. and David Sanborn.

At this point, Warren was in his senior year of high school, with a tough decision to make. An “A” student with a passion for math and physics, he was accepted into the prestigious program of Engineering Science at the University of Toronto. It seemed that the “logical” choice was to sideline his music and pursue a more stable career in Science. Thus began one of the most difficult years of his life. His studies were so demanding that he was only able to play music once a week. This made him realize even more how important music was to him. But then the sudden tragic death of his older sister literally flipped his world on it’s end and made Warren re-think his life path. Realizing that life was precious and his time on this earth was short, he decided that he’d better be doing what he loved. So he applied to Berklee College of Music in Boston and received a full scholarship. In his words it was the best “career” decision he ever made.

3 years later, on Hill’s graduation night performance, to his surprise legendary producer Russ Titleman was in the audience and hired Warren on the spot to record 2 solos on his current project Chaka Khan’s “CK”. The record included a virtual who’s who in music, including Stevie Wonder and Miles Davis. It was a dream come true for Warren. Little did he know that things would not necessarily happen that easily from that point on. He was still going to have to work hard to reach his dreams of becoming a recording artist in his own right. It was 1988 and Hill packed his bags in Boston and went west to Los Angeles to pursue his own record deal.

After only 6 months, one of Warren’s demo tapes was heard by Ahmet Ertegun and HIll was offered a recording contract with Atlantic Records. However, the celebration was short-lived as Warren faced his first challenge of perseverance: he spent 8 months on "cloud nine" composing and preparing to make the record, only to be shut down before ever stepping foot in the studio, due to sudden cutbacks at the label. After investing all of his time and money into a record deal that was now gone, Warren pulled up his boot straps and sent his tapes around to more labels. After 4 months of pounding the pavement he found his new home with Steve Backer and RCA Records, where Warren was finally able to introduce the world to his music. Backer allowed HIll the freedom to make the record with very little input from the label and Warren delivered "Kiss Under the Moon" his debut CD in 1991.
The CD quickly caught the attention of the industry and climbed to the top of the Contemporary Jazz charts. Most importantly, it caught the attention of Natalie Cole, who was looking for an opening act for her "Unforgettable" tour. Suddenly Warren found himself on the hottest tour of the year, performing throughout the US and Canada at some of the most prestigious and historic music halls, including 3 nights at Radio City Music Hall in New York City! A hit record and a tour that put him in front of 250,000 people in 2 months, the foundation for Warren’s solo career had been set.

Since 1991, Warren has released 11 solo CD’s which have reached combined worldwide sales of over 1 million copies. His live show is critically acclaimed as one of the best in his genre and has taken him around the globe including Southeast Asia, Europe and the Caribbean. He has earned accolades from a variety of institutions including: 6 Canadian Smooth Jazz Awards, Berklee Distinguished Alumni, multiple SESAC Songwriter Awards, a Juno Nomination, multiple Number 1 songs at Radio & Records, USA Today and Billboard. He has performed as a special guest for many Artists, including the number 1 Pop hits "Baby I Love Your Way" with Big Mountain, "Tell Me What You Dream" with Restless Heart". In the field of Contemporary Jazz he has been heard on recordings with Chieli Minucci, Keiko Matsui, Jeff Golub, Steve Oliver, Special EFX, John Tesh, to name a few, many of which became number 1 songs. Still a vocalist at heart, Warren continues to include his vocals on his CD’s, one of which reached Top 20 on the Billboard Charts in 1998 "Shelter From the Storm". His television credits include performances on Arsenio Hall, The Tonight Show and BBC’s Top of the Pops.

In 2002 Warren had an idea to create an event that would bring his fellow Artists and fans together for a brand new musical experience. He created the concept for the world’s first Smooth Jazz Cruise. After 2 years of development and planning, Hill launched "Warren Hill’s Smooth Jazz Cruise" in January 2004. It was an instant success. So much so that it spawned additional cruises mimicking Hill’s design. After 3 years of sold-out cruises, Warren decided to move on to other projects and handed over the reigns of his cruise to the capable hands of the late, great Wayman Tisdale. 7 years later, Warren’s initial concept and design are still producing several sold-out cruises per year, earning him the right to be referred to as a music business "pioneer".