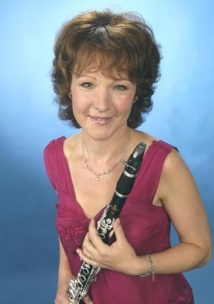 EMMA JOHNSON is one of the few clarinettists to have established a busy solo career which has taken her to major European, American and Asian venues as well as to Africa and Australasia.

Her recent recording of sonatas by Brahms and Mendelssohn with John Lenehan was described as “definitive . . . triumphant . . .a landmark disc » in The Observer (April 2012) and follows on from her Classical chart-topping successes: Voyage and The Mozart Album on the Universal label. She has an extensive discography on the ASV, Nimbus and Naxos labels, including a much admired recording of the Finzi Concerto, nominated for a Gramophone Award, and Pastoral, chosen as CD of the Year by BBC Music Magazine.

Emma Johnson has appeared as soloist with many of the world’s leading orchestras in repertoire that includes all the major clarinet works as well as pieces written especially for her by John Dankworth, Will Todd and Michael Berkeley amongst others.

Emma is also in great demand as a collaborative artist; tours in recent years have included performances with the Takacs and Con Tempo quartets, the pianists, Pascal Roge and John Lill, the cellist Julian Lloyd-Webber and sopranos Lesley Garrett and Elizabeth Watts. She is director of “Emma Johnson and Friends“, a versatile wind and string group, and in a recent development of her career, she has been invited to devise series of concerts on themes such as French Music, Schubert and Brahms.

An exciting collaboration with composer Jonathan Dove has seen Emma working with children in workshops and performances to recreate the story of The Pied Piper. She enjoys working with young people and has been appointed Visiting Professor at the Leeds College of Music where she will give annual master classes.

Renowned for her lyrical freshness and spontaneous expressiveness, Emma Johnson has also revealed an idiomatic feeling for jazz, blues and Klezmer in recent years. She arranges music of many styles for the clarinet; books of her compositions and arrangements have been published by Chester Music, Fabers and Kevin Mayhew.

Emma Johnson’s TV appearances range from a recital for Sky Arts to prime-time chat shows and gala concerts. She featured in the Channel 4 documentary about the late Sir John Dankworth and played the popular hit theme tune for The Victorian Kitchen Garden (winning a Novello Award) for the BBC. Her radio work includes Artist of the Week for both BBC Radio 3 and Classic FM and she has narrated feature programmes about Finzi and Milton for BBC Radio 4, both chosen as Pick of the Week.

Emma grew up in London. In 1984 she won BBC Young Musician of the Year and later she became a winner of the Young Concert Artists Auditions in New York. These successes launched her career whilst she was still at school but she decided to study Music and English at Cambridge University before embarking full time on a musical path. A Patron of ClicSargent, the childhood cancer charity (www.clicsargent.org.uk), Emma was also the first woman to be made an Honorary Fellow of Pembroke College, Cambridge and was awarded an M.B.E. in the Queen’s birthday honours 1996.