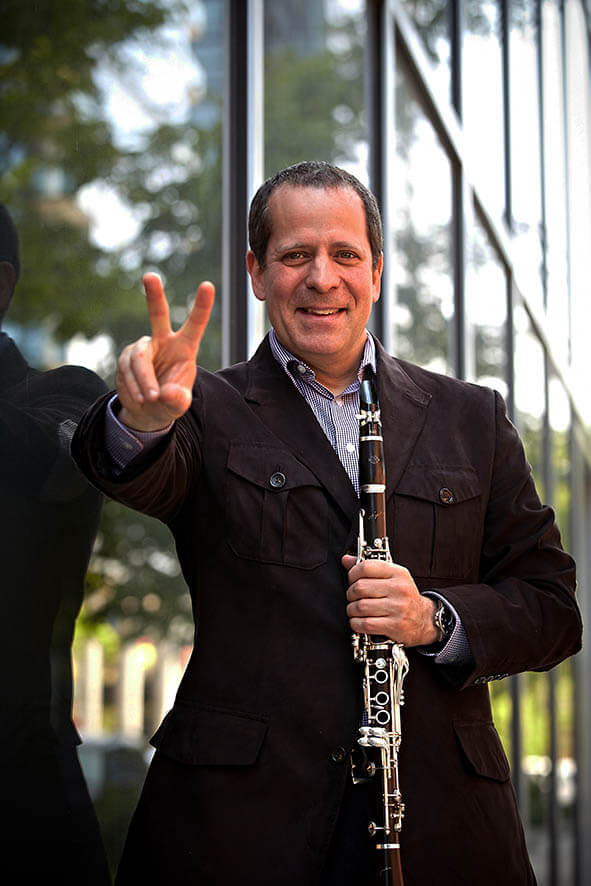 Todd Levy is Principal Clarinet of the Milwaukee Symphony Orchestra and of the Santa Fe Opera, as well as a participant in the Santa Fe Chamber Music Festival. Todd Levy is on the clarinet faculty at the University of Wisconsin/Milwaukee.

He made his debut at the age of seventeen performing the Hindemith Clarinet Concerto at Lincoln Center. Mr. Levy won his first Principal Clarinet audition at the age of 18 when he was appointed Principal Clarinet of the Stamford (Connecticut) Symphony.  Since then, some highlights of his solo career have included concerto appearances at Carnegie Hall, Lincoln Center’s Mostly Mozart Festival and with the Israel Philharmonic in Tel-Aviv.  In addition, Mr. Levy has collaborated with some of the latter 20th Centurys most significant composers in performances of the Brahms f minor Sonata arranged for clarinet and orchestra by Luciano Berio with Maestro Berio conducting, the World Premiere of Peter Schickeles Concerto for Clarinet and Flute with the composer conducting, the European premiere of John Harbisons Concerto for Clarinet and Oboe, and the World Premiere of Marc Neikrug’s Clarinet Concerto in March of 2010 with the Milwaukee Symphony Orchestra.  In addition, Mr. Levy was a featured soloist in the Mozart Bicentennial at Lincoln Center where he performed the Mozart Clarinet Concerto at the Mostly Mozart Festival. In November of 1998, Mr. Levy performed Gershwins Rhapsody in Blue at the White House for President and Mrs. Bill Clinton.  A frequent soloist for the Lar Lubovitch Dance CompanyLar Lubovitch Dance Company, Mr. Levy, at the request of choreographer Lar Lubovitch, performed the Mozart Clarinet Concerto in the U.S. Premiere of the Company’s Concerto 622 at Carnegie Hall. Since then, he has collaborated with the company numerous times in performances of this work at New York’s City Center and also with New York City Ballet Orchestra at the Dancing For Life AIDS benefit at Lincoln Centers New York State Theater.

He has participated in two Grammy Award winning recordings – the Orpheus Chamber Orchestra CD entitled Shadow Dances – Stravinsky Miniatures in February 2001 and the RenŽe Fleming CD entitled Bel Canto in February 2003.  In 1999, his recording of Gershwins Rhapsody in Blue with Michael Boriskin (piano) and the EOS Orchestra conducted by Jonathan Sheffer was given a Rosette in the Penguin Guide to Compact Discs.  His latest recording of the Brahms Clarinet Sonatas with UWM faculty member Elena Abend on the Avie label is available on iTunes.   In June of 2007, he recorded three book/CDs for a new project for the G. Schirmer Instrumental Library Collection called the Clarinet Collection published by Hal Leonard (see recordings section on this website).  In 2010, he recorded and co-edited the new Boosey and Hawkes edition of the Bernstein Clarinet Sonata which is now in book/CD form. Mr. Levy can also be heard on the 2008 release of Marc Neikrug’s Through Roses chamber work for the Koch label, together with violinist Pinchas Zuckerman, actor John Rubenstein and the composer conducting.  He has recorded for the Deutsche Grammophon, London/Decca, BMG and Telarc labels.  For a full discography, visit the recordings section of toddlevy.org.

In 1988, Mr. Levy became the principal clarinet of the New World Symphony under conductor Michael Tilson Thomas. In January of 1996, Mr. Levy made his debut as guest Principal Clarinet with the Metropolitan Opera Orchestra in all eight performances of Janacek’s The Makropulos Case with soprano Jessye Norman. Since that time and until becoming the Principal Clarinetist of the Milwaukee Symphony in 2000, Mr. Levy appeared regularly with the Metropolitan Opera Orchestra and as Eb clarinetist on all of the Met Chamber Ensemble concerts at Carnegie Hall with James Levine conducting and playing the piano. In addition to the Met, he has been guest Principal Clarinetist with the Chicago Symphony Orchestra, the Philadelphia Orchestra, the New York Philharmonic, the Cincinnati Symphony, Orpheus Chamber Orchestra, and the Orchestra of St. Lukes.

Recent highlights include the launch of www.toddlevy.org, Principal Clarinet for 2005, 2006, 2008 seasons of the Tokyo Opera Nomori under Seiji Ozawa and Riccardo Muti in Tokyo, and Principal Clarinet with the 2006 Saito Kinen Festival Orchestra under Alan Gilbert.  He performs exclusively on Vandoren reeds, mouthpieces, and ligatures, and Selmer Signature clarinets. Mr. Levy is a graduate of the Juilliard School where he studied with David Weber.