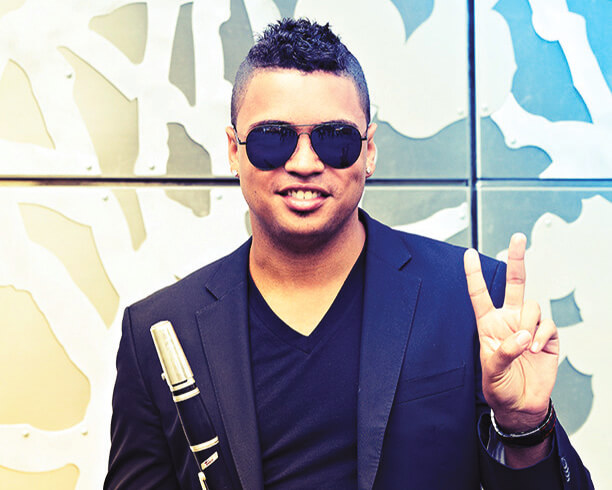 «I have never heard anything like this before… And I mean, this is good» Frank Tiberi (Saxophonist & Jazz giant)

Born in Oslo, Norway April 2nd 1990, Felix Peikli was introduced to music through the local marching band at the age of eight (8). After discovering his love and passion for music, as well as rapidly developing skills on the instrument, Felix received a Benny Goodman recording by his grandfather. Felix first appeared at the jam session at Oslo Jazzfestival in 2002, in the presence of Jazz greats such as Joe Lovano. He was invited back the next day as an official festival artist to perform at the Grand Hotel the Mirror Hall. Felix participated and won multiple contests, such as AOM (local), OM (state), NM (national), UKM (national), and received numerous distinctions, rewards, and prizes. Felix attended the renowned Barratt Dues Classical Institute of Norway and studied classical music with Fredrik Fors (from 2004 – 2008). In 2005 Felix won the National Dream Prize on national television, a distinction that kick-started his early career. As a result, Felix began performing extensively as a featured soloist and a bandleader after receiving massive publicity and recognition in national press.

Felix pursued his studies in music and attended Foss Music Highschool in 2006, the same year as he received an honorable and prestigious grant in the national television contest «Kjempesjansen» (the Grand Chance). Felix instantly became a national icon and the official face fronting the art of Jazz. Shortly after, Felix appeared at national as well as international festivals, international performances, concerts, (in countries such as in Italy, France, Germany, Sweden, Denmark, Croatia, U.K. etc.) and more. «Talent.no» became his official main sponsor in 2007, working closely with renowned artists Jørn Hoel and Steinar Albrigsten. Felix received the Capital of Norway Honors Prize as the youngest recipient to date in 2007, and the same year, Felix attended Berklee College of Music’s Five Week program where he was granted a Full Tuition Scholarship. In 2008, Felix hosted his ”Ready For Boston” concert in honor of his acceptance to Berklee College of Music. Felix returned to Oslo, Norway in 2009 touring Norway with his mentor and Berklee College of Music professor Harry Skoler, paying homage to their shared idol Benny Goodman honoring his hundred (100) years anniversary. In August 2010, Felix hosted his first international tour as a bandleader with his group “The Felix Peikli Quintet” and appeared at venues such as Oslo Jazzfestival, TV2, NRK1, Rica Victoria, and more. He returned the following year (2011) with his group «The Felix Peikli Quartet».

When Felix moved to Boston in 2008 he had the opportunity to meet and perform with and for many of todays leading figures in Jazz, such as Frank Tiberi, Harry Skoler, Terri Lyne Carrington, Danilo Perez, John Patitucci, Greg Osby, Joe Lovano, Dave Liebman, John Clayton, Eddie Gomez, Herbie Hancock, Jimmy Heath, Wayne Shorter, Ralph Peterson Jr., and many more. As the winner of the Vandoren Emerging Artist competition 2012 and as a part of the newly founded honors-program “Berklee Global Jazz Institute” (directed by world renown Danilo Perez), Felix has had a chance to meet many amazing and wonderful musicians worldwide. In 2011, he toured with the Berklee Global Jazz Institute performing in New Orleans, LA, and Panama. As of 2011, Felix became the sideman in Ralph Peterson Jr.’s world-renowned Jazz quartet «Ralph Peterson Fo’tet» that was featured on Peterson’s latest recording «The Duality Perspective» (Onyx Productions, released in May 2012) receiving amazing critics and reviews. New York Times describes Felix as «A star, basically». Felix graduated Berklee college of Music in May of 2012 with a bachelor degree in Music Performance.

Felix has always cared about reaching out and helping other people trough music and have always volunteered to perform for people who need it the most. He performed monthly at a clinic for patients with amnesia. In his mission to help others through his music, Felix hosted a concert in 2007 in the relation of Harry Belafonte’s visit to Oslo, Norway, where all the income was given in support to people with AIDS in Africa through UNICEF and resulted in raising 5000 USD$ for that cause. Felix is a very accomplished artist, and he still aspires to reach new heights. He is grateful for all the love and support he has received and thanks his mother Une Peikli and his family, friends and fans who has supported him to reach to where he is today. Felix will always be on the journey to make the best music possible, as well as helping others.