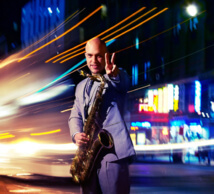 Contemporary, smooth, and eclectic – three words that just begin to describe Albert Rivera, “a modern Jazz Messenger” with one of the most exciting and sought-after saxophone sounds in today’s jazz scene. His first album, Re-Introduction (Turnaround Records), was warmly embraced by critics, who call Albert and his two band mates, Luques and Zaccai Curtis, “three young artists who are part of the next wave in this jazz ritual.” His latest album, Inner Peace, came out in August, 2010 on Turnaround Records.

Inner Peace will be the latest accomplishment in Rivera’s acclaimed musical career. Born in Bronx, NY, Albert began playing as a classical musician at age ten, and he made his first appearance at Carnegie Hall two years later. When studying at the selective LaGuardia High School for Music and Arts program, Rivera discovered jazz, and he was instantly hooked. “I was speechless the first time I heard Charlie Parker and John Coltrane.”

Rivera’s distinct style has been greatly influenced by classic jazz greats like Coltrane and by more contemporary sounds, like those of Joshua Redman. “When I first heard Elastic by Redman, I knew it was only a matter of time before I adapted it to my own voice. In my music, when composing new sounds, I use the modal aspect of John Coltrane’s works as a creative launching pad, mixing in a variety of grooves and rhythms. My music can make you move, it may make you think, and it definitely will evoke your emotions.”

Rivera’s musical journey includes playing at world-renown venues like the Litchfield Jazz Camp and Festival in Connecticut where he is also the Director of Operations for the Jazz Camp and the New School University Jazz and Contemporary Music Program. Albert has enjoyed the priceless opportunity to play and learn alongside some of the greats in jazz performance, like Don Braden, Jimmy Greene and Claudio Roditi. Others in this illustrious group who have influenced Rivera included Reggie Workman, Chico Hamilton, Billy Harper, Rachel Z, and Charlie Persip.

Rivera has toured throughout North America with his own Trio and Quartet, including playing at several New York venues like Smalls Jazz Club, Sweet Rhythm, Zinc Bar, Cleopatra’s Needle, Nyorican Poets Cafe and the River Room of Harlem. He appears often in Connecticut, at clubs like Szechuan Tokyo in West Hartford, or Black Eyed Sally’s in Hartford. He can also be found performing in top venues in the northeast such as Chris Jazz Cafe in Philadelphia, the Haven Lounge or An Die Musik in Baltimore, and B Smiths or the Smithsonian Museum of Natural History in Washington, D.C.

Albert Rivera is proud to exclusivley use and endorse RS Berkeley Virtuoso saxophones and Vandoren mouthpieces, reeds and ligatures.