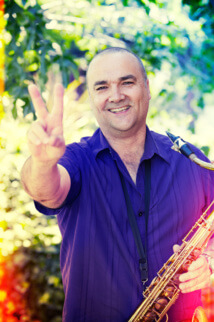 Music and art was an everyday thing in the Vivino household during Jerry’s childhood and throughout his adolescence. Influenced by both his parents, Jerry couldn’t help but to be exposed to the likes of Louis Armstrong, Miles Davis and Charlie Parker as well as Count Basie, Dinah Washington, Frank Sinatra and Ella Fitzgerald.

His older brother Floyd (Uncle Floyd Vivino) played a lot of Louie Prima and great swing and jump blues from the 30’s, 40’s and 50’s. Jerry found that he enjoyed listening to many different types of music. He would even listen to symphonic music as well. Stravinsky, Debussy and Leonard Bernstein were among his favorites.

At the tender age of 7, he attempted to learn the guitar, but did not connect with the instrument ( — that would be reserved for another member of the family). Nevertheless, at 9 years of age, his third grade teacher gave him a soprano recorder and within 2 or 3 weeks, he was mastering the instrument. His parents took notice of his progress and by the age of 10, Jerry was taking clarinet lessons. He quickly progressed and studied classical clarinet with his father’s cousin, Frank Vivino, and with Ray Gerrard.

In 1968, when Jerry was 14, he bought his favorite album, Jethro Tull’s, « This Was », and he still owns it to this day, keeping it in excellent condition. He also loved Al Kooper’s original Blood Sweat and Tears, and their first recording, « Child Is Father To The Man » was his favorite. Jerry also actually wore out all of Chicago’s first three albums!

Other favorites of his back then included Elton John, The Beatles, James Taylor and especially Sly and the Family Stone. Jerry listened to a lot of R&B and Funk as well. And because of brother Jimmy’s stereo speakers infiltrating into his room more often than not, he ended up being exposed to A LOT of Jimi Hendrix.

At the age of 16, Jerry started playing the saxophone. Jerry won state honors in the New Jersey All-State Jazz band in his junior and senior years in high school, which was ranked #1 in the state in 1971 and 1972.

Throughout his high school years, Jerry listened to all types of music, but Jazz was his favorite. Stan Getz was his first real influence and Jerry knew he wanted to be a saxophonist after hearing Getz play.

Jerry attended the Manhattan School of Music in 1972 and 1973 where he studied with woodwind guru, Joe Allard. He left the Conservatory to pursue a musical career on the road. In between road gigs he would continue to study with Joe Allard and Ray Gerrard. Jerry formed a band with his brother Jimmy in 1974 and the brothers haven’t stopped working since. As a horn player in the disco 70s, Jerry found that work was plentiful.

Jerry toured the country with Frankie Valli & the Four Seasons in 1978 and 1979. Jerry did not want to continue with lengthy tours, and wanted to make a living in New York, so he got off the road and started working steadily in the tri-state area. Jingle work and show work quickly followed. Jerry found himself working with Joan Rivers, Rodney Dangerfield, Tony Bennett and Ray Charles, to name a few. Jerry played in the band in many Broadway shows, including Leader of the Pack, Annie, A Chorus Line, Cats, The Mystery of Edwin Drood, Starlight Express, Just Once, Groucho and Grease.

In 1989 Jerry was asked if he would play on a record with a relatively unknown band called Killer Joe. It was started by Joe Delia and Max Weinberg, who decided to contact a few session musicians in the NY area to form the group. A recording was released in 1990 and even though the project never really got off the ground, this is how Max Weinberg got to know Jerry.

In 1993, when Max was asked if he would put together a band for a late night talk show, he contacted Jerry to find out if he would like to audition for Late Night With Conan O’Brien. At that time, Jerry and his brother Jimmy were both playing with Donald Fagen and New York Nights, and were on the verge of making a commitment to the first Steely Dan Reunion tour. More than a few people thought they made the wrong decision, passing on a great opportunity to tour with Fagan and Becker for just the slim possibility of a TV show. Yet, Jerry eagerly agreed to the audition, and as it turned out, the Steely Dan Reunion tour only lasted five weeks! Jerry can still be heard nightly, playing in the Max Weinberg 7 on NBC’s Late Night with Conan O’Brien.

Jerry’s true passion in music is Jazz and R&B. In addition to being a member of the Max Weinberg 7, he can be heard playing with his brother Jimmy in the Vivino Brothers Band. He also is the leader of a really fun group with bass player Mike Merritt, drummer James Wormworth, keyboard player Brian Charretteand frequent guests, trumpet player Lew Soloff and guitarist Melvin Sparks.