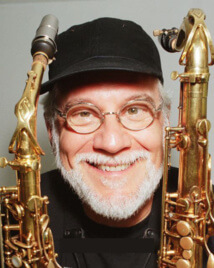 George Young is one of the most frequently heard musicians of our time. Young plays over ten instruments, including the tenor, alto, soprano, and sopranino saxophone, the clarinet, alto flute, c flute, East Indian and ethnic flutes, and the piccolo.

George Ernest Opalisky Jr. aka “George Young”, professional reed player since the late 50’s, is one of finest technicians in fusion, jazz, swing, bebop, rock, studio and concerts, and although he is one of the most heard, he is one of the most unknown. A virtuoso in most of the reeds, he specializes in the tenor and alto sax when in recording sessions with such artists and musicians as George Benson, Ron Carter, Jack DeJohnette, Martin Mann, David Sanchez, Earl Klugh, G.E. Smith & The Saturday Night Live Band (’91-96), Jay Hoggard, Dean Friedman, Dave Holland and Toots Thielemans and so many others. George has also recorded solo; recorded in the combos of the great Steve Gadd, Jay Leonhart and John Tropea; in the big bands of Louis Bellson and Benny Goodman, and as a leader for both the Chiaroscuro and Paddle Wheel Studios, working with the dozens of artists that went through their doors. George is very respected throughout the world’s music industry and by all the heavy saxophone & reed players.