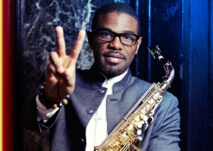 Antonio Hart has long been recognized as one of the most talented instrumentalist of his generation. In recent years he has also been recognized as an important Jazz educator. In his 20 years as a professional musician he has performed and recorded with many jazz greats, from Dizzy Gillespie, Roy Hargrove, Nancy Wilson, Nat Adderley, and McCoy Tyner to Dave Holland.

Hart’s study of Jazz began at the Berklee College of Music in Boston. There, he studied with Bill Pierce, Andy McGhee, and Joe Viola. The three teachers gave him the foundation he needed to develop into a professional musician. Because of the lessons learned at the Baltimore School for the Arts, Hart really thought it was important to have a balance between music and academia, so in his sophomore year he became a Music Education Major.

He made many friends at Berklee, but the most important was Roy Hargrove. They spent three years touring the world and recording Hargrove’s first three records. Hart considers Hargrove to be his brother in life and music. He even used Hargrove on his first recording ‘For the First Time.’

After graduating from Berklee College of Music, Hart also worked on a Masters Degree at Queens College. There he had the opportunity to learn from the great Jimmy Heath and Donald Byrd. Hart felt blessed and honored when Mr. Heath produced his second recording ‘Don’t You Know I Care.’

His 1997 release, ‘Here I Stand’ Impulse records, earned Hart a 1997 Grammy nomination for ‘Best Jazz Instrumental Solo.’ He has also been in much demand as a guest on over 100 recordings, and seven CDs as a leader. The latest, ‘All we Need’ Chiaroscuro Records.

After 12 years at Queens College Hart was promoted to Full Professor. Hart also maintains an extensive performance schedule and continues to conduct workshops and clinics throughout the United States, Europe, and Asia. He feels very blessed to have the balance of teaching, as well as, traveling around the world. In his off time, he practices martial arts, and listens to other styles of music for inspiration.

Hart is constantly trying to honor his many teachers by continuing to study music and teach to the best of his ability.