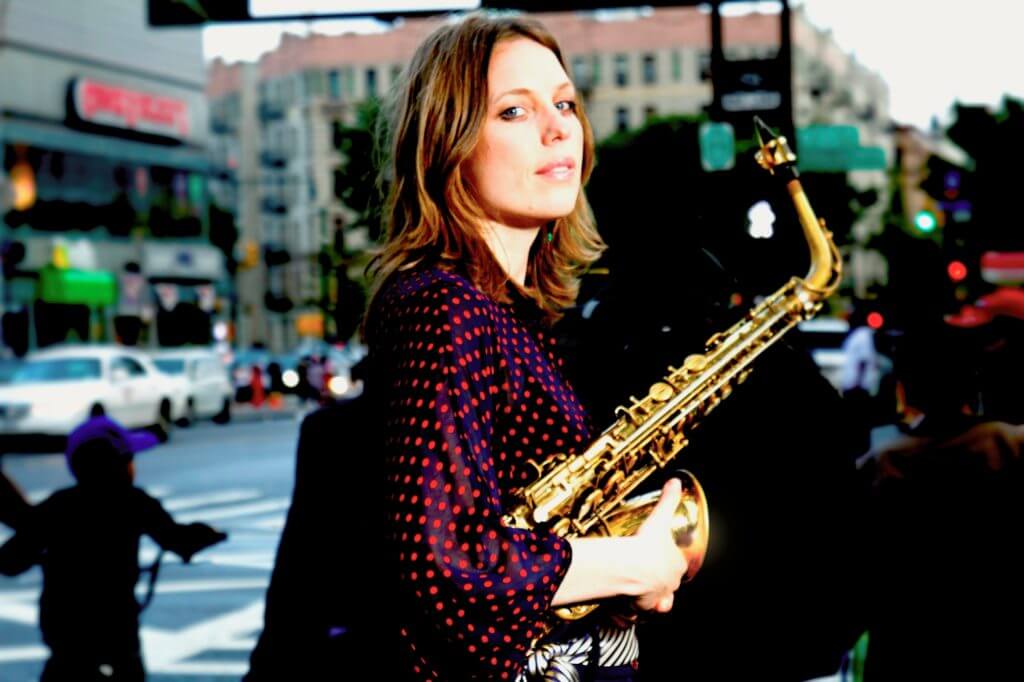 Let’s call it a calling. Tineke Postma was just a kid when she decided that she wanted to play jazz. The fact that she at a tender age listened more to the jazz albums of her parents – Miles Davis: ‘Round About Midnight! – than pop records exemplifies her early infatuation with the genre. Upon entering the Conservatory of Zwolle another decision had already been made: she wanted to make a living playing the saxophone. And that’s what Postma did. After having graduated cum laude from the Conservatory of Amsterdam she took the world by surprise and developed into one of the most applauded and successful jazz players Holland has ever known. In 2015 she is honoured with the Boy Edgar Prize, Holland’s most prestigious jazz award.

Determination is the word that describes Postma’s attitude best. Honing her skills at the Manhattan School of Music she was noted by some key players of the New York scene, a connection that eventually resulted in performances and recordings with stars like Terri Lyne Carrington, Greg Osby, Wayne Shorter, Esperanza Spalding and Scott Colley. The albums of Dianne Reeves and Teri Lyne Carrington featuring Tineke Postma even received Grammy Awards. Looking back on her New York experience over the years she says: “I have spent a lot of time on my own in New York to drag myself out of my comfort zone. Being vulnerable brings out the best in me. And I do feel vulnerable when I’m out there. You have no idea how many incredibly talented players – really young girls and boys too! – populate the New York scene. They really made me realize that I had to study even harder.”

So far the results of studying for so many years have been very satisfying. Even before she graduated in 2003 her talents were obvious for all who heard her play. In that same year she received the Sisters In Jazz All Stars Award in the United States and she also played at the international jazz festivals of Vienne and Umbria. In 2006 she received at Midem the International jazz Revelation of the Year Award and three years later she got the Jazz Juan Revelations Award in Antibes. The graduation year 2003 was also the year of her internationally well received debut First Avenue, the first album in a row of six. Her sophomore effort For the Rhythm (2005) confirmed her status in the States: the album spent three weeks in the top 20 of the Jazz Week Chart and could be heard on more than 250 radio stations. Every subsequent release was received with rave reviews and The Dawn of Light (2011) was crowned with the prestigious Dutch Edison Award – a prize she shared with her band consisting of Marc van Roon (piano), Frans van der Hoeven (bas) en Martijn Vink (drums).

Bit by bit Tineke Postma created her own personal sound on both soprano and alto saxophone. When asked how to describe that sound she answers: “Provide ten players with the same instruments, reeds and mouthpieces and they will all sound different. A great part of the sound is beyond your control because of your anatomy, the way you are built. That’s your starting point, but there are parameters you can control. I play off on my sound: loud, soft, cold, vibrato, timbre, warm – lots of variation depending on the note I play. My default sound is warm. The sound reflects my mood – or the mood I want to set up. If you’re tired, you will sound tired. Are you energetic, the tones will come out energetically. Creating a sound, I often think of colours. What colour is for a painter, is sound for a musician.”

Postma’s style of playing is often characterized as post-bop by the critics. Postma: “Post-bop or not: what I am after is to really improvise. I want to come up with new, fresh ideas. Each note should be a reaction to the stuff my band mates are playing. Jazz is a form of communication which leaves no room for eloquent speeches shutting up the rest of the group. Wayne Shorter taught me that each note should contain an image, or should be a word or a sentence in a story. When he played his latest album Without a Net for me, he would jump out of his chair and say Did you see that ship floating by? or Oh my God! Did you see that? Isn’t that beautiful? That approach really opened me up. I used to play notes that would fit in with a certain bass line or chord. Now I try to visualize them like Wayne d!oes.That makes a world of difference.”

That the playing of Tineke Postma makes a world of difference, has been proved again and again. John Fordham, jazz guru of The Guardian, called her a post-bop prodigy and DownBeat magazine listed her (again) as one of the rising stars on her instrument. In 2012 Postma was invited to play at the International Jazz Day at the Assembly Hall of the United Nations in New York next to her idol W!ayne Shorter, an occasion she described as ‘it was like standing next to God.’

Postma’s latest pièce de résistance was Sonic Halo, an album she recorded with her mentor Greg Osby and an incredible rhythm section consisting of pianist Matt Mitchell, bassist Linda Oh and drummer Dan Weiss. Postma: ”Recording the album Sonic Halo proved to be a major step in my career. It was a really positive challenge – and that’s exáctly the feeling that brings out the best in me! I want to peel off all the layers of my musical being to get to the essence, the core of myself. But finding that core is not essential. And there my spiritual side comes out: for me it’s the journey that counts, not the destination.”

Sonic Halo and the Boy Edgar Prize mark the beginning of a new phase in Tineke Postma’s career. The jury of the ‘Boy Edgar’ praise her qualities as a band leader: ‘due to her respect for other people’s talents, she leads her own groups with a sensitive and therefore natural authority – a quality that pays off in her sidemen’s contributions, surely lifting her ensembles to a higher level.’ And also her talents as composer and improviser are glorified: ‘she disposes over enough individuality, guts, passion and potential to develop her own style of contemporary jazz both in the Netherlands and abroad. ‘And last but not least: stretching out to establish new frontiers, doing justice to the essence of jazz: an open and free art form.’ It’s very clear that the journey of Tineke Postma has only just begun.